That’s it. A few strategies immediately spring to mind, but I bet you could come up with some really complex ones.

Aside: what would you call little games like this? Nim, rock paper scissors, tic tac toe all kind of fit in the category. Almost game-theoretical exercises.

I don’t understand this MEDIAN game. Why wouldn’t everyone always pick 4 or 5? When would anyone score a point? What incentive is there to pick another number? Am I stupid?

Ties are no point. So the game ends 0-0-0, nobody wins. You need to make someone score more than you.

Oh, I missed that part. I thought you were just playing for the highest score. I like that mechanic of winning by having the middle score. I wonder how that would apply to more “normal” games. I think it could work great for a lot of three player games. Imagine a three player T&E where the winner has the middle score.

Remember that the winner is the player whose score is strictly between both of their opponents’. With absolutely no attempt at mathematical rigor, it seems like you could eliminate one or two opponents using “always choose 4 or 5” by always selecting 1 or 8 until an opponent is winning, then changing strategy.

Two players who always choose 1 or 8 and one player who always chooses 4 or 5 will force a draw, unless there’s some kind of sudden death rule (in which case the 4/5 player would only be in contention during sudden death P=.5^8 - ie. if the 1/8 players managed to pick the same number in all 8 rounds, leaving the score 0-0-0, at which point they would continue to have no chance to win unless one of the players modifies their strategy) 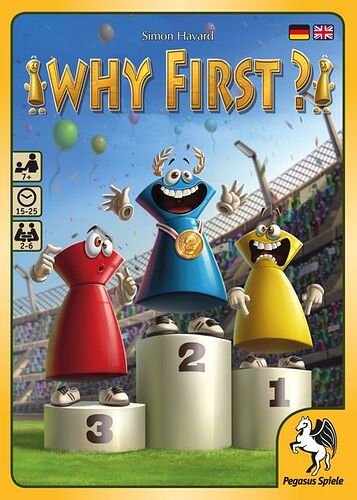 Why First is just Mario Kart

Mario kart game, but abstracted into a card game instead of a track.

I just half-designed it in my head, and I think it’s good.

Aside: what would you call little games like this? Nim, rock paper scissors, tic tac toe all kind of fit in the category. Almost game-theoretical exercises.

I call them “toy games,” and I’ve encountered others who do the same. 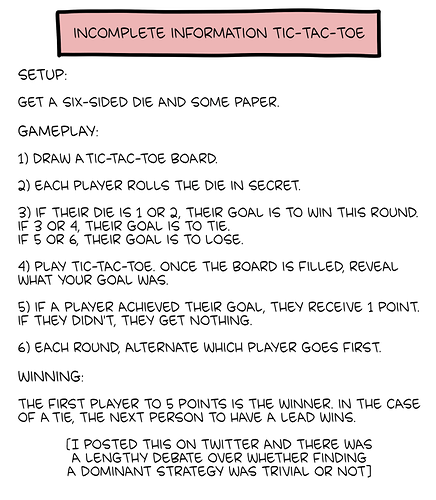 Yo dog, we heard you like poison cup games.

I followed his discussion on Twitter as he was developing the concept. A lot of people pointed out that a draw is the most likely outcome in tic-tac-toe so it might be unbalanced because of that. But I wonder if that means that there should only be two outcome options each player could be trying to achieve: win or lose.

Someone claims to have analyzed this Tic-tac-toe variant and found that player 2 still has a slight advantage:

Player 1 has the advantage in normal tic-tac-toe, so that’s at least a change.