This forum being composed of approximately 80% people who make non-tangible things with their brains, I figure what what we definitely need is a thread about making physical things. Advice, questions, methods, tools, bragging about stuff you’ve made, whatever.

This may or may not have been inspired by the fact that I lightly shredded my thumb with one of my die grinder burrs like an idiot(It wasn’t even spinning, I mean, come on man what are you doing), and didn’t have anywhere to grumble about it on the forum. And also to give a central place for the occasional “How do I do X?” questions that pop up, without having to read every goddamn thread as if I don’t do that anyway.

Ah, so I recently purchased a pretty cheap MIG, fluxcore welder. I have my beginner project (which is just welding 3 pieces of metal together in the shape of a triangular prism (while also trying to bend them so the whole thing resembles a beak). And I have my end goal advanced project (The powerfist from the fallout series). I need intermediate projects.

[quote=“Naoza, post:2, topic:688”]
Ah, so I recently purchased a pretty cheap MIG
[/quote]How the hell did you buy a Russian fighter jet???

[quote=“Naoza, post:2, topic:688”]
I have my beginner project (which is just welding 3 pieces of metal together in the shape of a triangular prism (while also trying to bend them so the whole thing resembles a beak).
[/quote]Bend first, then weld. And the better you clamp it when you tack it together, before you run your proper bead, the easier you’ll find it. Honestly, I’ve rarely used fluxcore mig, I’ve almost exclusively used gas-shielded MIG, so let me know how you go.

And don’t worry too much if it’s not great at first - remember, a grinder and paint makes me the welder I ain’t. And funnily enough, the reason I was checking over and fitting a new bit in my die grinder earlier was to clean up someone else’s shitty booger welds.

Thanks for the advice, I will let you know how it goes. Sadly I’ve been remarkably busy outside of work with all this amazing weather (softball and volleyball mostly) so this has been put on the back burner but I will post pictures of my beginner booger welds soon enough. I’m excited. Being able to put metal together has a just learning to program feel. I can just make anything I want.

[quote=“Naoza, post:5, topic:688”]
so this has been put on the back burner but I will post pictures of my beginner booger welds soon enough
[/quote]Man, it took me a lot of practice before I stopped blowing holes in things. Your beginner booger welds are something to be proud of - your first teetering steps into a new skill. Just make sure you get a decent breath mask - welding fumes don’t stink too bad, but inhaling it over any decent period of time will fuck your lungs and sinuses.

Also, an extra tip - when you inevitably invest in some sort of subtractive metal shaping tool for builds down the road, get an air-powered die-grinder. Don’t buy a Dremel - they’re all speed and no torque, and for anything bigger than baby jobs, especially with metal, speed just makes noise, torque does work. Dremels will just torque out and stop in anything harder than blancmange unless you take it real slow, but a good die grinder will chew through and have plenty left to give you. You can get decent enough ones for the job reasonably cheap, and quality tips can be had reasonably cheap. For jobs the size of the ones you’re planning to do, they’re a better investment than a grinder, since they can handle both small, fiddly jobs, and bigger grinding jobs, with the right bits.

Seconded here on the Dremel comments.

If you’re looking for YouTube channels to look at for learning or just generally basking in awesome, here are a handful.

Don’t forget Jimmy Diresta!
Just about every video of his makes me think about using a material in a different way.

[quote=“RobotMitchell, post:8, topic:688, full:true”]
Don’t forget Jimmy Diresta!
Just about every video of his makes me think about using a material in a different way.
[/quote]I like Jimmy, but I’m not so on board with MAKE - they’re far from the worst group out there, but they do have some deep and serious problems with race and gender. Lots of women being treated like mascots, lot of not giving a shit about non-american makers, a lot of not giving a shit about non-white makers, and a lot of very classic techbro “We don’t have a problem, all of us white American folk are the most inclusive of all so shut up” attitudes and responses when questioned or confronted.

I’m collecting all the parts to assemble and solder together all the lights and key switches (Zealios 65g or 78g haven’t decided, like clears but lighter with a higher actuation point) for a mechanical keyboard. I haven’t soldered in ages (literally decades), so I’ll try on some crap PCB before touching a PCB I buy.

I’ll post a build log when I actually get all the stuff and make it. I got a tiny soldering iron (made by a company called “seeed”, couldn’t afford JCB for hobby project) that lets you program some basics regarding temperatures and what not.

Good quality solder costs quite a bit but all the research I’ve done seems to indicate it’s better for noobs to get the better quality solder.

This keyboard will help me make more non-physical things :P.

I wasn’t aware of that, that’s unfortunate to hear. I unsubscribed from MAKE’s channel a while ago, just because the content was so hit and miss. The handful of contributors (like Jimmy) that I do like end up reposting the stuff on their personal channels eventually, anyways.

My dad got me a Hakko 888D soldering station for my birthday (he ended up getting one for himself too), and sweet Jesus is this thing great! Until now I’ve been making do with a $12 pencil soldering iron from RadioShack, and it’s a night and day difference! I don’t have any experience with Weller or any other serious soldering irons, so I can’t speak comparitively.

It heat’s up in 10-15 seconds and holds a consistent temperature. I haven’t messed with it yet, but you can set five or so temperatures and cycle through them. The iron is much lighter and thinner than the pencil style cheep-o I was used to, and the length from grip to tip on the Hakko is about 2/3 as long, which makes controlling it a lot easier. 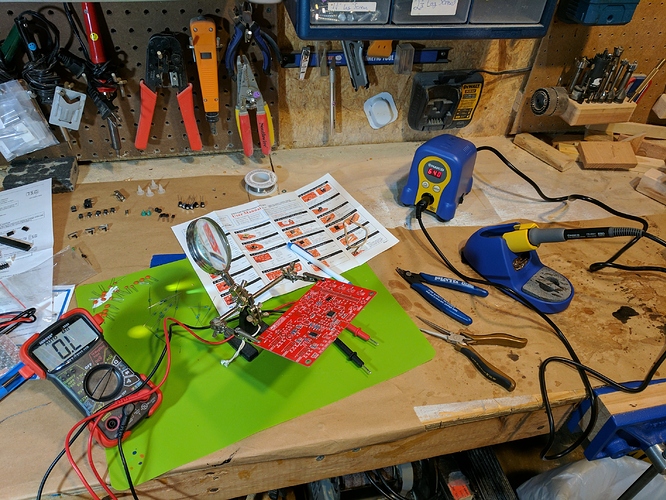 I’ve been learning how to sew lately. I have no idea what I’m doing. It’s basically just me googling “how do I do X” or “how do I deal with Y problem” and experimenting with whatever I find. I wish I could find a comprehensive introduction to sewing, but I get a lot of hit or miss tutorials which I have trouble understanding.

Regardless of my struggles, just a couple of days ago I finished my first creation. 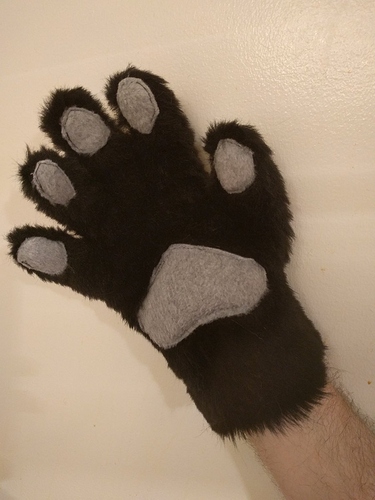 It’s a pretty good Paw, let alone for a first attempt. And hey, everybody learns somewhere! My mother learned dressmaking with the 1960s equivalent of the internet(books and asking people) I don’t see how just learning from the internet is any different.

It’s just slower learning without having someone knowledgeable around that can help out. I spent 30 minutes trying to figure out why my sewing machine was stuck until I read that I had disengaged the clutch. I then spent another 30 minutes realising that the hand wheel and stop motion knob were in fact different things and that I had to turn one but not the other to re-engage the clutch. I figured it all out and everything’s running smooth now but damn that was frustrating because I didn’t even know where to start.

A mix of making stuff and failing, I designed some multipurpose PCBs for my home automation stuff, but fundamentally misunderstood how a chip worked making it unable to drive LED strips. So using what I had on hand I kludged another microcontroller on to solve the problem. 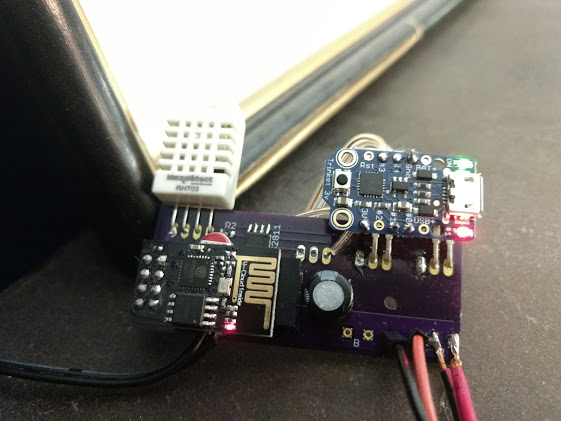 It was my first time ordering boards from OSHpark, good experience overall, $12 for 3 boards, 2 weeks to my door.

This particular one is acting as a temp / humidity sensor and doing an artificial sunrise thing. I have another one controlling watering of the garden and a third I need to set up to monitor the conditions in my cellar and control a dehumidifier. Next related project after that is a new thermostat.

I hear those are really nice, but the pushbuttons are a deal breaker for me; I got a Weller WESD51, and it is so good. (According to Amazon reviews, not as good as the Hakko, but close.)

I gotta tell you, though, upgrading those helping hands should be on your to-do list, for the same reasons.

I just bought a variety of alligator clips and have a 12v PC fan with a couple different speeds. I plan on making a more robust helping hands with a fume extractor in the middle; I’m not sure how I’ll design the arms, though.

Edit:. I just ordered a cheap phone tripod from Amazon. Hopefully the legs will work like I’m hoping for the arms.

These test indicator holders work well. They’re meant to hold testing equipment for machining and the like, but they can be repurposed as helping hands. They lock into place instead of using a friction fit, so they’re really easy to maneuver into position.

If you don’t mind spending an absurd amount of money, you can get a nice set of squid-style hands (which are a bit overpriced) that bolt to a Panavise (which was worth every cent). 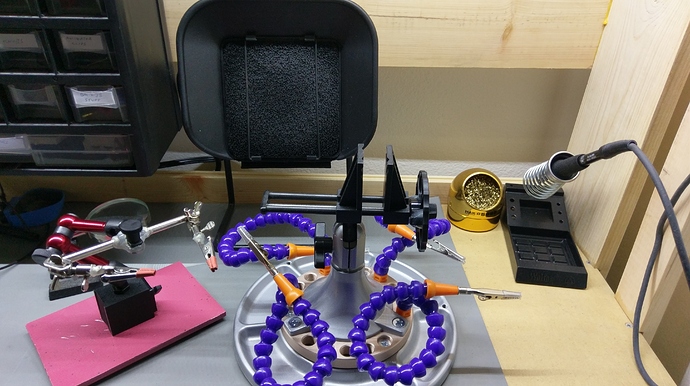 4000×2240 1.92 MB
Bear in mind that I solder a lot and I picked up all this after almost a decade of make-do with the cheap stuff; your mileage may vary on whether the cost is worth it.

Also, that tripod will probably work, though you might have trouble getting alligator clips to stick to the ends, and you may have problems with reach, but I love that price point. If you don’t mind increasing your part cost eightfold, mounting it to the end of one of those indicator holders would help with the reach problem.

I’m going see how my Mcguyvered together solution works first, but I’m definitely saving those links for a future late-night Amazon ordering bender.