Rym still won’t disclose the url of the beta episodes.

Nobody knows the closer music.

But I think I found siiiimultaneously.

I mean with references, each one of us is going to get exactly the ones we get and totally not get the ones we don’t

The ones we get we won’t even notice and therefore won’t think to bring up here.

I assumed siiiimultaniously was from adventure time and I’d get it when I finally just watched it. Guess not.

You are correct. You were able to get one reference simultaneously.

I believe the closer music was found, and a link to it possibly exists in the old forum.

I want to know where “Daddy two ____” comes from. I say it all the time from the show but I have no idea where it originated.

The full version of the intro music can be found here. That’s an easy one.
https://www.youtube.com/watch?v=mtyNns77pwk

Penny-Arcade has one of the best searches in webcomics I’ve seen.

One of the patreon supporters seems to be called mystadiadotcom but when try to visit it there’s nothing there. I was wondering if it might be something of an easter egg.

There is a minor character in the hobbit named daddy two-foot, /shrug, could be that anyway.

Rym still won’t disclose the url of the beta episodes.

What’s the statute of limitations on that URL now that those episodes have been remastered and released to Patreon backers? 'cause I’d really like to see everyone else kick themselves as hard as I kicked myself when I figured it out.

Maybe we should hint.

I vaguely recall the closer music being from the same place the Thing of the Day stinger is from.

The interstitial jingle, I recently discovered, is from Sailor Moon R: The Movie.

I honestly don’t get why anyone cares about where the beta episodes are. Rym and Scott keep saying they are garbage, and from what I’ve heard of them, yeah, I agree. Why do you keep trying to look for the garbage? Life is too short.

It’s about finding it, not listening to it!

Exactly. Having listened to (or rather tried to listen to) a bunch of the beta episodes, it’s definitely not about the episodes themselves. The main satisfaction I got out of it was having finally solved a multi-year-long puzzle. The solving is the key thing, not the “reward” for having solved.

Considering it’s getting close to a decade for some people since they started trying to solve this particular puzzle, that’s why I wondered if at this point we could either give the answer outright or at least a more substantial hint. Because you’re right: that’s too long a wait for what is admittedly not a very good reward.

I found them and then forgot where xD

I am looking for the video someone made of hand-drawn cartoon Rym and Scott.

It’s animated to them saying something (about Utena?) like

The whole thing is maybe 5 seconds.

Iirc it should be under Gomidog’s posts on the old forum, since she’s the one that made it.

Edit: turns out I’m probably wrong, I did find this though. 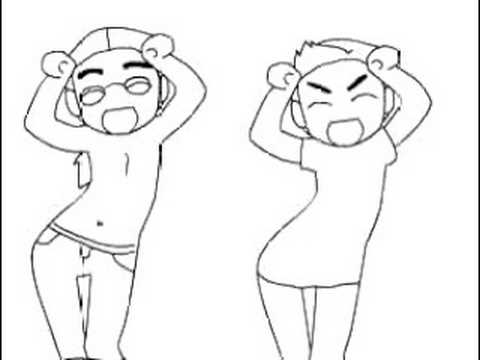 Found it! This is the one I was thinking of. Thanks though @Spookyswirls.