Drying mat recommendations needed. I have a silicone one right now and it’s ok.

Thinking of getting microfiber instead. Thoughts? 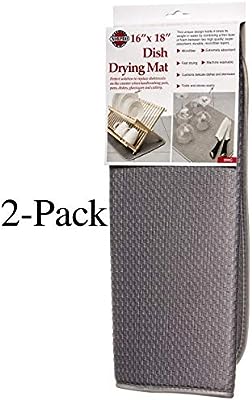 They get the job done. They fold up and go in the cabinet when not in use. They survived the washing machine.

Even more reason not to own a Roomba.

Your Roomba already maps your home. Now the CEO plans to sell that map.

He bets most users will fork over their data for the convenience of a smarter home.

Question for electric toothbrush users. Oral B or Sonicare?

I have a Sonicare and I like it, but I don’t have a point of comparison.

How often do you have to replace the brush heads? Do you buy brand or generic?

Generic, and probably every month or two, maybe three. I might actually spend less on brush heads than I used to on cheap toothbrushes.

Use a normal tooth rush. There is no need to get an electric one.

It’s just like regular brushing, but you only fight the bosses,.

I was thinking more of an endless runner game but that works too.

Use a normal tooth rush. There is no need to get an electric one.

I said the same thing to my old housemate, when I lived with that dentist - Turns out that is objectively wrong. Electric toothbrushes are simply better. As he put it, it’s like the difference between an old candybar dumbphone, and a latest model smartphone(which admittedly at the time, was the Iphone 3gs): They’ll both do the core job just fine, but there’s so much more the smartphone does that makes it far more worth your time.

You don’t have to get a super fancy one, apparently, even the cheaper ones get the job done, but if you can afford to upgrade to an electric toothbrush, you should.

My teeth are already perfectly clean. The dentist doesn’t tell me to use an electric toothbrush. In what way is it empirically proven to be better?

Let me google that for you

Electric toothbrushes are measurably better, but it doesn’t necessarily matter if you already have healthy gums and teeth. If your dentist recommends it it’s probably for a reason, if they don’t then whatever you’re doing is fine.

According to Consumer Reports dental adviser Jay W. Friedman, D.D.S., M.P.H., if you don’t currently have gingivitis, “it really doesn’t matter which brush you use.”

Let me translate that.

Disgusting people with fucked up mouth problems due to lack of proper dental hygiene will be helped by an electric toothbrush because they obviously don’t know how to brush properly. People who fucking brush their teeth don’t need mechanical assistance.

Not quite. There’s a lot of evidence that many of the common tooth problems are caused by factors beyond a person’s control. For example, no amount of correct brushing/personal hygiene will prevent cavities if someone has deep ridges in their molars.

Oh, also go to the dentist regularly. I have deep ridges and got sealants.

Man, you’re pretty defensive about your toothbrush. Seriously, lashing out and making tacit accusations of dental problems and lack of dental hygine because other people do things differently? That’s weirdly aggressive and borderline “that guy”, lashing out like that over something as mundane as a toothbrush.

Like I said - or more accurately, relayed - both do the core job fine, just that one does the same job better, with more useful features. If you can upgrade, you should, but that doesn’t mean that if you can’t(or I guess just don’t want to) that it’s bad. One is a 4 out of 5, the other is a 5 out of 5 - it’s cool either way, it’s fine.

That’s just Scott being Scott. But anyhow my dentist recommended I get an electric toothbrush. On top of that, I eventually need to have my wisdom teeth pulled for a whole list of reasons.