Tonight on GeekNights, we review Masaaki Yuasa's phenomenal Night Is Short, Walk On Girl. Just go see it. Don't even wait to listen to our review.

In the news, Hanebado is bad, The Dragon Prince is good, Assassination Classroom is all right, Adventure Time's ending was perfect, Bojack Horseman continues to be excellent, Care Bears looks like it will be ultra cute, DuckTales (2017) is fantastic, and SPACE JAM IS GETTING A SEQUEL WITH LEBRON!

Night is Short, Walk on Girl is amazing. Already calling it the best animated film of this year, probably in the Top 5 of this year in terms of films over all. Feels like Amelie mixed with a “Happened one night” film. Gotta have to see more of Yuasa’s work.

Meanwhile, Bojack continues to be one-half of a good show and one-half of a terrible show. This season felt like Rapheal Bob-Waksberg was going through a crisis kinda like with Rick and Morty of like “Assholes love this show by identifying with Bojack and I think I fucked up doing that.” Season 5 is all about that and I love that part of the show, but the comedy still kills it me for this time. Fuck the Todd subplot this season in all of it’s fake sitcomy nonsense where he comes a CEO for no reason. I’m tired of the fanbase saying this show is grounded/reasonable when shit like that happens nonstop. 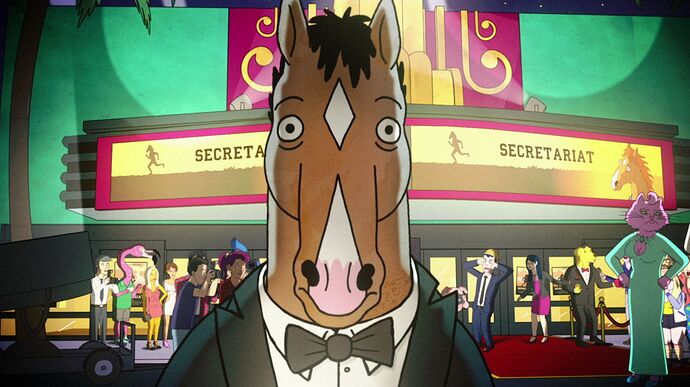 Learning Harvey Weinstein was a fan forced Raphael Bob-Waksberg to ask himself tough questions. In Season Five, he tries to answer them.

I’m really pumped for the new DuckTales. The first season was solid; I’m probably as excited for this as I am for new Steven Universe content at this point.