If the Gunsmith Cats OAV were just a long-running anime series, I’d definitely watch it.

Have you ever read / watched Geobreeders? If you like Gunsmith Cats you would really dig it, very very similar, down to the gun nut author whose pen nane was BREN303 after the British machine gun.

Oh no. You reminder Rym about the existence of Geobreeders.

This is bad because…?

Scott Can’t answer you right now, because he’s currently in Rym’s apartment, strapped to a chair with eyelid retractors on, watching Geobreeders and Rym occasionally drops saline into his eyes.

I knew @SkeleRym and I had a lot in common.

I also thought I was the only Western person who has heard of it.

I was finally able to find it on the Internet: 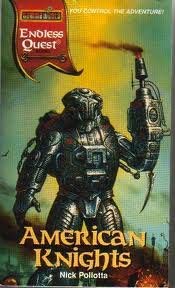 What I remember (which could be wrong) is that you were a municipal dog catcher. However, it’s now a post-apocalyptic Mad Max world. According to the Internet it’s an actual setting known as “Gamma World”. Everyone else above you in the chain of command is dead, so now technically due to succession, you are the President of the United States. Somehow you find a very powerful AI exoskeleton suit that recognizes you as the President, and therefore allows you to get inside and wear it. You then venture off into Mad Max world.

OH, I was pulling that up when I searched but thought Google was being dumb due to how similar that name is with many factions of the KKK. I didn’t even think to pull it up and look at that one. Thanks!

how similar that name is with many factions of the KKK

This a problem I am just now realizing that fantasy authors have to deal with when naming bookings. I had never considered this before.

Well, let’s be honest. As cool as it is to be the grand dragon, that’s not a very creative name. Even without the name being taken for evil means, a writer that couldn’t come up with something better probably isn’t very good at writing to begin with.

You didn’t know about Gamma World?

I never played a game in it, but I knew all about it thanks to Dragon Magazine articles.

I learned of it just now.

Hoops: Sentient Bipedal Rabbits that are basically Gamma World’s Orcs and have the ability to transmute any metal into rubber by direct contact.

Yexil: Omnivorous Lion-Dragons that shoot lasers out of their eyes, but are generally good-natured and prefer to subsist on a diet of synthetic fabrics.

That is my preference of world wackiness. I may need to check this out.