Tonight on GeekNights, we review the 1995-96 Gunsmith Cats OAV, directed by Takeshi Mori and based on the manga by Kenichi Sonoda. It's a wild and succinct trip into what 90s anime were like. In the news, Looney Tunes are back, the Utena Musicals are covering Black Rose, a creepy guy sued Funimation, a handy twitter blocklist will keep fans of that creepy guy out of your mentions, and Junji Ito was at TCAF!

This episode reminded me of a time long ago 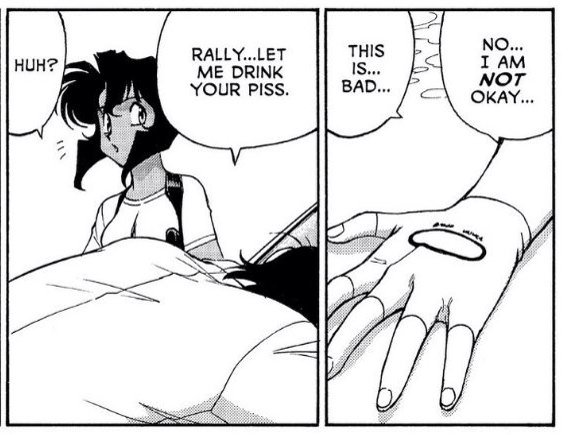 Yay I made a Thing of the Day.

Weirdly enough, I think I’m pronouncing Bowie wrong too! In my head that’s not what I’m saying and not what I sound like. But yeah, listening back it doesn’t sound right. Not a big enough issue to rerecord anything though.

I once met Monica Rial at a convention. Our eyes locked and we both silently acknowledged to each other that anime conventions are weird as heck.

@SkeleRym In defense of said HS gaming group, you skipped the entire game the few times someone tried to run Planescape. You also skipped on every game he tried to run. You showed up for the first game, then every game Dan ran.

Haha, that is true.

I think the problem was more that I like the idea of Planescape games, but the D&D system makes them fall flat or feel very samey with Prime Material Plane games. It was something I couldn’t articulate when I was in high school, but now I think a lot about RPG theory.

Some sort of system around belief translating to power in the appropriate context. Mechanics around how planes change you as you spend time in them. Things like that.

Some sort of system around belief translating to power in the appropriate context. Mechanics around how planes change you as you spend time in them. Things like that.

And here’s where I agree with you. We have a Planescape game that’s currently on indefinite hiatus because the rules and the story we were trying to tell. I would live to try Sig or another story-heavy system to play a game like that. Even Fate might be a good system for that kind of story.

It’s funny when I think back about when I’d really engage in our D&D games, and when I’d skip them or disengage. I didn’t have the gnosis of role playing mechanics to understand my own behavior.

It’s especially fun to look at our most engaging characters and games. Dan’s “d20 of fate” and playing out long scenes without rolling dice were where our A+ experiences came to the table.

Dungeonworld might be a nice fit too with its D&D flavor, but narrative driven rules

Dungeonworld might be a nice fit too with its D&D flavor, but narrative driven rules

What defines a character doesn’t have enough weight in Dungeon World. You need a game where those are changing, present parts of your character sheet.

Which is why even though I’m currently enjoying the system, Genesys is the wrong one to try and accomplish that.

It’s especially fun to look at our most engaging characters and games. Dan’s “d20 of fate” and playing out long scenes without rolling dice were where our A+ experiences came to the table.

Yeah, though I’m finding it more interesting when social interactions can also incorporate the game mechanics at some level. It helps people who aren’t as naturally forward a little and keeps some people from making a character with no social skill on paper but end up dominating conversations anyways.

The important thing is story moving forward, not the little metal figures on the table that are the A+ moments. And when the dice change the story, I think the story’s stronger for it. Or at least, the fun at the table.

What defines a character doesn’t have enough weight in Dungeon World. You need a game where those are changing, present parts of your character sheet.

Each character sheet has explicit callouts that allow them to fundamentally manipulate the world in a way other sheets can’t. The core system is essentially around Tags on items and people and places and GM and player invoking of this tags to do things but only triggered by narrative action. Theres a ton of custom classes withing dungeon world or class redesigns of the ones they give that play with this further.

Obviously I don’t have specific knowledge about your game and your judgement is key as to if it would work, but I just wanted to emphasize it has as much flexibility and permanence as a system like FATE might have.

I listened to some Sig Actual Play, and it really, really didn’t work for me.

I bought a Planescape bundle from DriveThru and, of course, haven’t had time to dive in.

Dungeon World would probably be my first choice, assuming combat is going to be common. The setting is kind of a big ask, so either everyone needs to be familiar or everyone’s a berk who got dumped somewhere they don’t belong. A friend was using Burning Wheel, which could totally work if everyone wants to play BW.

I listened to some Sig Actual Play, and it really, really didn’t work for me.

It’s been a read-only system for me, so I’d love a point in the direction of it to listen if you remember the name of the podcast.

I don’t listen to much AP, but I am a fan of One Shot.

I had worried it was one-shot. The show’s always struck me as a fun listen, but a terrible example of the game they’re playing.

I’m trying to remember the last AP I listened to from One Shot… I think it was Tenra Bansho Zero. It did what I wanted.

The weird bits notwithstanding, Gunsmith Cats is like… my wheelhouse. Hot girls, powerful guns, big explosions and fast cars - 80s and 90s action movie garbage, I love it so so much.