Tonight on GeekNights, we review the recent Deca-Dence anime. (Don't worry: no spoilers). Don't read anything about it until you watch it. It takes... a turn. We Judged that this show was probably OK, but wouldn't be in a rush to check it out unless people started talking about it. And talk they did.

In the news, Katsucon 2021 is cancelled, Beastars 2 is coming January 5th, Venus Wars is getting an English re-release, Discotek is releasing a 4k UHD Lupin III: Castle of Cagliostro, the Suppose a Kid From the Last Dungeon Boonies Moved to a Starter Town anime looks cute, and Adventure Time: Distant Lands - Obsidian dropped a trailer.

“With Discipline”
@Rym,
Have you written anything the length of a novel before? Because that’s a really presumptuous comment. I’d written 4 novels before I picked up an Alphasmart Neo2 because the focus is easier. It’s not just fighting against the distraction machine of the internet, it’s also about the details of what work you’re doing, if spellcheck is chasing you, telling you where you messed up. Pinging a thought that makes you wonder if you’ve got something right, hitting an idea that you feel like you need to research to reach the next sentence instead of just telling your later self to fix something later.

First drafts are a different kind of thinking and writing, and the simple tools, that only give you the ability to put words to page, can be part of a writer’s ritual to attain the flow state.

I have not. I’m going solely on how all my author friends talk about their process.

What I strongly agree with is that purpose-built tools are the real future here. (And the present for many people). Writing a draft? Hopefully there is a fully-formed draft tool specific for novel-length works. Editing and rewrites? Ideally a different dedicated tool, or at least a different view/mode in a larger tool.

That said, half the authors I know just write in Google Docs.

There are many modern distraction-free writing tools out there. Just google for “focused writing program” and you’ll see plenty of choices.

But most of them tend to look something like this: 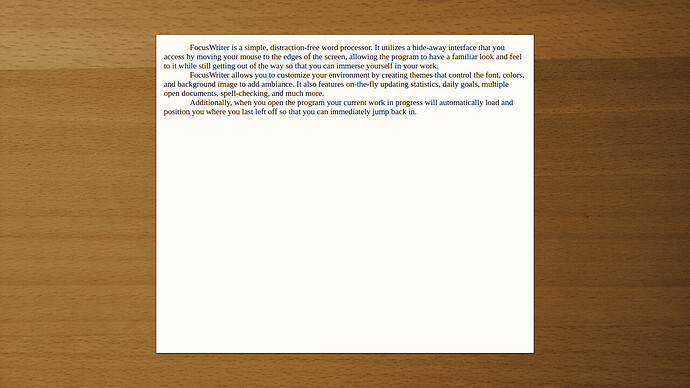 As opposed to this: 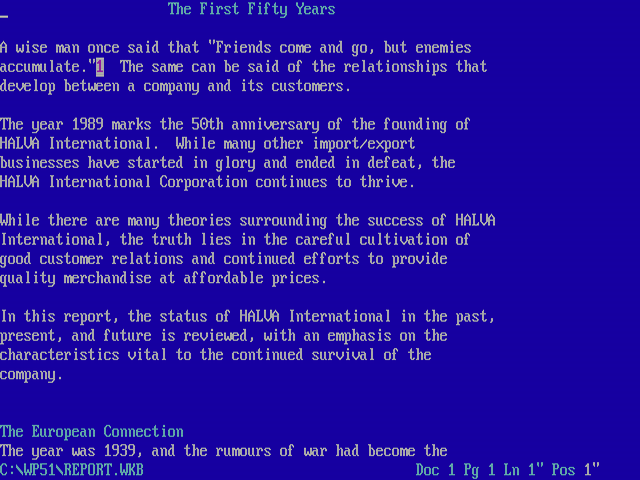 There’s just something psychologically different about the monospaced font and the block cursor, at least for me.

While I wouldn’t personally state it quite so strongly - not a knock of Nerick, of course, I’m just a soft touch sometimes, hard to believe as it is - but I absolutely agree. Speaking as someone who literally writes for a living, if all you’ve got is discipline, there’s exactly two places you’re going - either nowhere, or burnout.

Writing, overall, is a lot like a good fart - if you have to force it, it’s probably going to be shit. Everybody got their thing, their little rituals and processes to get to that place where they can do it.

Personally, I tend to use a combination of google docs and scrivener, depending on what I’m doing, I’ll have a fresh tea on the desk. Then I’ll flip on a video(Youtube, netflix, Prime vid, maybe a dubbed anime because I can’t read subtitles while I’m going, sometimes just music, sometimes podcasts), and get down to business. When videos end or similar, I flip over and switch them, when I run out of tea, I take a longer break to refresh it, at which point I might have a snack. Both serve as little soft-breaks, where I can keep thinking about what I’m doing, go back over things in my head, and resettle without breaking from the task entirely, which would make make coming back much harder. My trick is less forcing focus or constant effort, than understanding my own ebb and flow of attention and effort, and how to surf that wave rather than trying to swim against it or getting dumped by it. Fugue state management games, basically.

In the past when I was a more frequent smoker, I’d also sometimes sit out in the sun with my typewriter and laptop, and just sit there, write, smoke, drink tea, research and so on on the laptop where needed. I wrote a lot of stuff for radio that way when weather permitted. It was nice. Pipes were especially good for that, since I could smoke hands free, and a good pipe could last for a fair while before needing attention.

Ironically, distraction free writing tools drive me fucking bonkers. Brain spins faster than fingers can move, even being able to type quite fast, so I have to end up going back and forward in a way that doesn’t fit my mental pattern, or try to pull it back and slow down mentally, both of which really throw me off. Having something else going in the background takes up just enough mental bandwidth to match gears and keep things rolling right. Embracing distraction and using it as a tool, rather than trying to exclude it works much better for me.

(Edit - and yeah, there’s also a lot of going back and editing what I’ve already written here and there as I go. As anyone who has seen one of my posts here go through a half-dozen revisions over time might guess.)

Using Movie Magic Screenwriter for scripts was WAY better than half assing anything in a normal word document program or something terrible like notepad. Intuitive software auto-formatting and powerful shortcuts for manually triggering specific formatting as you write made things go a long way in terms of just letting me focus on the readability of the script on the page.

Churba,
Thanks for sharing your ritual. It’s always interesting seeing how other people do their Fugue state management, as you put it. I ended up having to toss my rituals in the garbage when lockdown started, and I’m still trying to figure out my new ones. Writing in a coffee shop before work was a great ritual, right until all inside seating closed for six months. And thanks for agreeing with my point even if I expressed it a little salty.

When I’m writing on my laptop, I tend to use a Pomodoro timer (25 minutes of work, followed by a 5-minute break). There I use Google Docs since all of the specialty programs require an operating system other than ChromeOS.

The current process right now is three tools: first draft on the word processor, second draft in Gdocs, followed by the third pass in Grammarly. It’s pretty basic, but I’m also just working on getting something written that might get published instead of writing for a living.

And thanks for agreeing with my point even if I expressed it a little salty.

Oh no, I understand entirely. I don’t think it was salty, just emphatic, and there’s nothing wrong with that, it’s something you’ve clearly got a passion for - like I said, I’m just a bit of a soft touch at times. I’ve certainly given both of them serious bollockings from time to time, so even if you had got salty, I’ve no room to criticize.

The coffee shop is a popular option, a lot of people find it helps. I do sometimes do that on a particularly nice day here - since I’ve got some lovely local coffee shops that don’t get arsey about me hanging around too long. I’ll sometimes go when I’m struggling with certain descriptions, I find that being able to just look around at folks helps with shifting me into the right headspace when the gears are sticking a little.

I was lucky, in terms of the lockdown - I already work from home the majority of the time, so my rituals didn’t have to change much, but housemates being a constant presence was definitely a bit of a challenge at first.

Something else I find helps, is dictating. I tend to use a (uh, maybe not entirely legit) copy of Dragon Naturally speaking, and sometimes I’ll just dictate instead of typing. A bit slower, but it’s just the headspace I’m in sometimes, and plus, it does let me do some stuff like play a game while dictating out some work. I’ve managed some good work with Destiny or Warframe on one screen, and just chattering away, stream of consciousness, being taken down on the other.

(I do have to sometimes go back and edit out the random swears and interruptions, though, I nearly sent a draft in recently with an absolutely random “Fucking get that up ya dickhead” right in the middle of a graf, from when we finally beat a rather challenging strike boss.)

I don’t use Grammarly, I’ll have to check it out, thanks for the tip.

It’s pretty basic, but I’m also just working on getting something written that might get published instead of writing for a living.

Now, let me tell you a secret - you’re every bit the writer I am. You’re just as worthy, and exactly as justified in calling yourself a writer. The only difference between the two of us is that I’ve somehow managed to trick people into paying me for it, and I’ve every confidence that you’ll have someone writing you a metaphorical cheque in the future too(Though possibly with less trickery, or at least, self-deprecation). I wrote before I got paid, I get paid to write now, and I’ll write after nobody wants to pay me anymore. Money is nice, but it’s still just money, the contents of your page make you more of a writer than the source of a paycheque ever will.