Tonight on GeekNights, we consider the recent Netflix x Sanrio hit Aggretsuko. In the news, Marmalade Boy live action, Stan Lee's lawsuit against Pow! Entertainment, Rym returning from TCAF, and Rick and Morty getting picked up for 70 more episodes.

The GeekNights Book Club continues, and you should check out our Youtube Channel!

Yes, we started planning on a different topic. Only the people who watched the stream would know

It is but of course a secret.

My father has a motor neurone disease and for many years he has had a lot of trouble walking… but cycling? Easy! His muscles get weaker the further they are from his spine, so his hands and feet get it worse. He has way less control over how he can balance using his feet and ankle strength. But on a bike he can use his core body weight to balance. He often will bike somewhere, and when he gets off his bike, just fall over, get up, then start walking. Carrying a walking stick on a bike is weird, but can be attached with some bungy cords.

I was thinking about this, what would be the best panel roster for an anime convention? Mike, Joel, AWO, Viga, Charles, Victor come to mind but outside of that can not think of anyone else.

There are people from other parts of the country, like west coast, that we don’t know about. Have to check like, the Sakuracon panel schedule.

That be a hell of an idea, anime con where the hook is that the best panelists arrive as the feature with a few ancillary activities. @VictorFrost @Viga and recommendations for this imaginary idea?

I wrote up my take on Aggretsuko here: 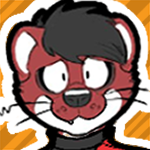 So, further thoughts on Aggretsuko: it was entertaining, but I was expecting something more. I heard a lot of talk about how it's this groundbreaking portrayal of women suffering under workplace politics and hierarchy, and I think that's really overselling the show.

Only watched the first episode. It’s cute, but infuriating with the old hat/basic office BS sexist shit. I know it still happens, but it’s nothing new to me, I guess.

Also, this show invigorates my desire to continue working from home. @apreche if you’re digging the adults with adult lives and issues vibe you should definitely check out Otaku ni Koi was Muzukashii. It’s a comedy romance but it’s about nerds who have become adults and the trials of love and life as grown-up nerds.

Having watched most of the rest of the show now…

Fenneko is the best character.

Watakoi is great and confirms my belief that “All romantic comedies should be about couples who are dating/in relationships, not will they/won’t they tension until the final episode.”

Definitely. I’ve always been a fan of a few episodes of “will they won’t they” so you can get the fun of “Oh man they got together yay!” when of course they do get together and go on with the story from there.

My friends at TLX (stunt team) would be good people to have, same with the Imperial Knights (Weapons demonstration). Unfortunately, I spend so much of conventions doing panels or playing games that I’m not too familiar with the quality of other panelists. I know lots of folks who do panels, but I couldn’t tell you how good they are.

I watched through the show and really enjoyed it. Fenneko might be an even better avatar for Rym than Nick

Fenneko might be an even better avatar for Rym than Nick