Tonight on GeekNights, we review the beautiful and unique co-op board game The Grizzled. It's deeply thematic, expresses the horror and camaraderie of war, and isn't about winning war: just surviving it. In the news, the Stanley Cup playoffs continue, Mario Kart 8 Deluxe comes unlocked, G2A did an ill-advised panel, Fig funds a spiritual successor to the original X-Com franchise, and Super Bomberman R drops resolution to increase framerate.

I tried introducing The Grizzled to Rym at MAGfest last year using nearly the exact same bullet points that Matt did, only we never played it.

Not to be a meta-pedant, but “literally” doesn’t mean “figuratively”, it adds emphasis to figurative speech. It doesn’t tell you that something is figurative when you otherwise wouldn’t have known.

EDIT: I lied. I totally wanted to be a meta-pedant.

[quote=“DemoWeasel, post:2, topic:675”]
I tried introducing The Grizzled to Rym at MAGfest last year using nearly the exact same bullet points that Matt did, only we never played it.

[/quote]I was probably distracted by the bells and whistles of MAG.

It’s the only con where I play non-tabletop games for more than a few minutes.

We didn’t even play Grizzled first: we played Amon Re! Grizzled was the “I guess we can fit one more game in” game.

This one has been on my radar for a little while. I’m you guys liked it.

Have you played This War of Mine? It’s a video game with a board game adaptation coming out soon; I have the Steam version, and the demos I’ve seen for the tabletop version look pretty good. It’s set in a Sarajevo-esque city. You play the civilians. During the day it’s not safe to leave the abandoned building you’re hiding in, so you try and put up barriers against raiders, salvage resources, keep people’s morale up, etc. At night you go into the city to trade or scavenge. It throws some seriously tough decisions at you. Someone is sick and will die without medicine; do you steal it from the hospital? A man knocks on your door holding a bleeding child; do you give him your only bandages? A very hard game in a lot of ways. One of the most sobering experiences I’ve ever had, but I definitely recommend it.

Was the ending bit of music from Party Hard? 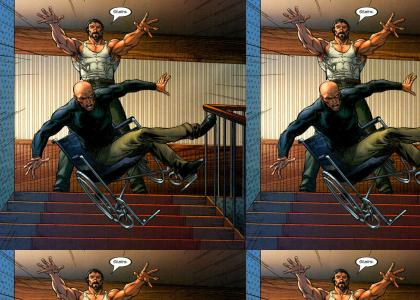 Professor X had ONE weakness!

Cruelty to the handicapped CAN be funny.

I wound up buying the expansion for Grizzled today. It was $13 on Amazon.

The base game was only $15 during tabletop day sale on Amazon yesterday. Def a steal.

A guy in London showed me The Grizzled about a year ago. I wanted to get it but I forgot about it entirely until I saw the name in the podcast.