GeekNights Tuesday - The Ends of Games

Tonight on GeekNights, we consider the ends of games. When and how do orthogames end? When and how should they end? We're workshopping a new game design panel for a future convention.

In the news, Crucible recedes back into the dark recesses of a closed beta after a unilaterally mediocre reception, a whole chunk of the games industry is rightly called out (there are too many articles to list them all), Superliminal is coming to Switch on July 7, Natural Selection 2 not only still exists but is on sale, and we're beginning to livestream the show again. 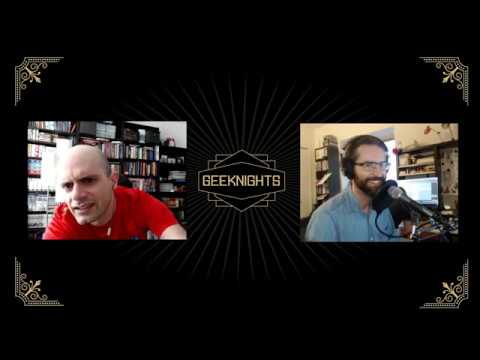 I hadn’t heard about the allegations about Cards Against Humanity.

For a while I listened to a podcast featuring Max Tempkin, mostly because I already listened to a few other podcasts with one of the other hosts. But I stopped listening, mainly because the weird vibe from Tempkin. I’ve worked for people like him before, in two different jobs, and leaving both companies felt like “an escape”, which is the same phrasing as ex-employees in this article I just read.

And in both those companies I worked for, the founder (or one of the founders) were, to put it kindly, untrustworthy in their history of sexual conduct.

If I had done more than simply stopped listening to the podcast and done some more research into Tempkin, I’d have found out about the past rape allegation. And due to my history with people like him, I’d have been zero surprised!

As Scott has said many times, why don’t we just make lists of all the people we think “Well that guy has probably been up to no good” and just check? It seems so obvious! But I don’t assume a history of abusive behaviour, I just assume… well, I don’t assume, I just stop listening to the podcast or stop reading their writing or whatever.

There’s also how Tempkin viewed himself and his company. There seemed to be a huge cognitive dissonance, with a huge mismatch on what he (and his company) did compared to how he did it and what image he thought he was projecting.

As it happened, last week I had finished all the podcasts in my queue, and was looking around for something to listen to. I checked out some episodes of podcasts I’d unsubscribed from for various reasons, and one was the latest episode of Do By Friday. Max Tempkin wasn’t on it, just the other two hosts, and they didn’t mention where Max was or what he was up to. He’d often turn up late to the podcast recording, so I assumed this was the same kind of thing.

To be honest, I only got about 10 minutes into the episode, and it had none of the same vibe or energy as it had before, so stopped listening again, totally missing the fact that Tempkin had been fired by his own podcast hosts. I didn’t know the full story until reading up this morning after hearing about it on Geeknights.

Fun example of endings in one sport:

In racing, the “game” may “end” when the lead car completes a certain number of laps. The race is then actually over when the cars behind but still on the same lap cross the finish line. So the final result (the ranking of the players in orthogame jargon) is decided after the winner is decided… but is super soon after.

If there’s a lot of rain or other delays, the race could be declared over after a certain time. But it doesn’t end as soon as that moment arrives, but after that time… plus one lap of the lead car. It’s a set of rules that have been worked out after many iterations to weed out weird edge cases.

The strangest example of race endings is when there is an accident and it’s considered likely that the lead car won’t have the fuel/tires to make it to the end. Then it’s about taking a risk and diving into the pit lane for fresh tires/more fuel, and back out. You can come out further down the pack, but be in a better position to make your way up again.

Except this happens, and the track isn’t cleared in time, or there is another accident, and the race ends behind the safety car.

Or if someone accidentally waves the chequered flag early or waves it too late or a computer makes the same mistake.

All of these ending conditions are in the rules!

A good race team will have a strategist keeping track of all these.

In racing, the “game” may “end” when the lead car completes a certain number of laps. The race is then actually over when the cars behind but still on the same lap cross the finish line. So the final result (the ranking of the players in orthogame jargon) is decided after the winner is decided… but is super soon after.

Considering an orthogame formally is a ranking of all players, not just a “winner,” we have to consider the case where one or more ranks are decided, but other ranks remain undecided.

This exposes a deep divide in a lot of political tabletop gaming. Do players who are mathematically eliminated from rank 1 strive to achieve rank 2, 3, etc…? Or do they sandbag the leader or otherwise disengage.

I find in practice that in non-professional or non-tournament game play, players don’t care at all about any rankings other than first or last. They want to be first, and they don’t want to be last. If they are incapable of attaining first rank, they tend not to change their strategy toward securing second rank.

Even more interesting, when the first rank is nearly decided, but not mathematically decided… players have a specific choice that boils down to something like:

a) Take a risky strategy and attempt to seize first rank, the consequences of failure being potentially falling to last rank.

b) Take a safe strategy that ensures they will not achieve first rank, but practically guarantees that they’ll achieve second rank

In my experience, any non-professional non-tournament player will take option A in almost all tabletop play.

Another point that comes out of your post is the game state that arises when something external to the game forces a conclusion and how that state is inspected and recorded.

I think there’s a lot of material to examine there.

In the case of a race, e.g.: F1, there are points awarded towards the championship for many places beyond first. Teams that aren’t the best are often happy to just make it into the points.

Cole was talking about this on the Oath stream yesterday. Oath has a lot of kingmaking possibilities, which he is usually not a fan of. However, because there is state that carries over from one game to the next, there are valid storytelling reasons to king-make into the next game. “Ok, you win, but make sure my territory survives to the next game!”

The point is, that if you ever want non-first place to matter in a ranked game, you need some larger context such as a tournament or other state that carries over. It could even be something like Mario Kart where you play 4 races in a little mushroom cup.

In the case of a race, e.g.: F1, there are points awarded towards the championship for many places beyond first. Teams that aren’t the best are often happy to just make it into the points.

Additionally, F1 has two ranking systems: One for the individual drivers, and a separate one for the various teams.

The point is, that if you ever want non-first place to matter in a ranked game, you need some larger context such as a tournament or other state that carries over

But by the very definition of an orthogame, players are just ranked. It is objectively better in that context to have a higher rank. It doesn’t actually make any special distinction about rank one.

Put specific rules in the game so as to make the ranks other than first matter.

“After the game is over, all players must compliment each higher ranked player.”

That actually addresses the “time to exult in your victory” idea that came from the listener during the stream.

I actually do enjoy formal rules for certain social interactions in games. The requirement to say “Glory to Rome” in Glory to Rome." Forced to call the mob boss “boss” so long as they are still the boss. Things like that.

These have to be done very carefully so as to not not be socially harmful. You have to call the boss “boss”. And then someone plays in a game where there is one white person and 5 Black people, and the white person becomes the boss.

Even my example of being forced to compliment the winner can be a problem if the winner is a huge ass who doesn’t deserve compliments.

Thankfully, there is an adjacent design pattern in APX. Bypass.

Let players agree to bypass one or more of the rules of the game if it will be a problem for any player at the table.

The site mostly talks about bypassing aspects of a videogame, but the same applies to what can amount to “optional” but non-mechanical rules. Make a clear bypass path in the rulebook and write it in such a way that encourages players to address is in a non-confrontational way. Make it easy.

X-card does that well in terms of the “ease of removal”.

Rule books would do well to explicitly state such things. Maybe even include “agree on the option rules as a phase of the game setup.”

A bypass is perfectly fine. But it’s much better to not have anything that would ever need a bypass to begin with.

Game without an ending: poker. Anyone can join or leave the table at any time, but the game could theoretically go forever.

And that one gives you the title of the panel: The Finish Line.

And that one gives you the title of the panel: The Finish Line.

I did have those types of game ends written down, but I guess I didn’t say them on the show?

Maybe I missed you say them. Wasn’t listening that closely. I’m pretty sure you didn’t say the words “Elam ending”.

No, I didn’t say it. But the Elam Ending is really just a combo of other ending formats and not a unique type in itself. It’s a timed ending followed by a score ending.

Same with timed races like Le Mans. There is time-based ending point condition (24 hours has elapsed and the lead car crosses the line) then an car-position sorting process that really only “matters” in the final lap.

I think the combination of “timed then other” is a big enough category to be mentioned in its own, as it is common in Motorsport, but also now exists in basketball and I’m sure examples can be found elsewhere.