Tonight on GeekNights, we consider handicapping as applied to games, and wonder at how rarely it's used outside of sport. But before that, in the news, we consider the nuances of a fartwarning versus a fartwatch, Ion Hazzikostas will give the PAX West Keynote, PAX South will be January 18-20, we have a first impression of Yellow & Yangtze (the noble successor to Tigris & Euphrates, which we reviewed back in 2005), Fantasy Flight has some new printing process allowing for Keyforge and Discover Lands Unknown to be made, and we will be presenting The 40 Tabletop Games You Must Play at PAX West!

I’d wager the primary reason competitive tabletop games rarely if ever use handicapping mechanisms is simple that most players, even serious ones, never play a single game enough times to warrant it.

Handicapping has a long history in Go, it ties into the ranking system pretty elegantly, You basically give the weaker player a set of extra prescribed moves up to the difference between the ranks of the two players, e.g. a 10kyu playing a 15kyu (higher is weaker) would give the 15kyu 5 first moves, usually in an evenly distributed pattern.

I had a new player come from Chess and he refused to play me with a handicap. He kept on saying that he didn’t want to win because I made one mistake or he got lucky.

But Go doesn’t work like that, I’d have to make 5 or 10 mistakes in a row, and the weaker player has to recognize that those are mistakes and attack them. Neither of those things are going to happen.

A lot of new players don’t get that being given a handicap is a good way to make the game even. It doesn’t look like it when, as a player who’s gotten 5 or 10 games under your belt and you see 9 stones in front of you and you’re wondering how the hell is this “stronger” player going to do anything against you! You got 9 first moves! This is going to be cake! The game’s almost over! You just have to button it up and then you’ve won! But you’re new, you barely know how to play, let a lone even use the advantage you’re given. But, it is some use, in go at least, the extra moves teach you how to use what you already have, while complicating things for a vastly superior foe.

Minor rant because I work in the printing industry:
They didn’t come up with any new kind of printing process. Everything they’re doing is relatively simple, they’ve just decided to make use of digital presses instead of traditional printers to print a mainline game instead of Print on Demand like DriveThruRPG. There’s a database sitting behind the desk of the designer who’s building the print, and the software merges the database (and the link images of the cards) with the final pdf. The cards are printed out in sets, probably in sets of 16 decks at a time and then finished on a high die (https://youtu.be/AHbV5HcUHiA).

The interesting bits of this aren’t the printing technology. The interesting thing for Keyforge, and the biggest question, is if they actually managed to create a solid procedural engine to design the cards.

In juggling we have a game called “5 ball endurance” which is exactly as it sounds like: juggle 5 balls for as long as you can until only one person is left juggling.

The way this handicapped is that in a mixed group, everyone juggles however many balls they want, and if they win, they increase the number of balls by one. If everyone juggles 5 to begin with, the winner juggles 6 balls on the next round, and everyone else stays with 5. That means they are less likely to last as long, and so someone else has more chance to win. At some point someone could still be on 5 balls while others are up to 8 or 9.

It’s not a common juggling competition, but it’s the perfect example of handicapping.

it’s the perfect example of handicapping.

If I had to hazard a working definition of good handicapping, it would be something like.

Your example has everyone still juggling, is still testing the same basic skill, is still pushing every player to their personal limit, and uses the immediate feedback of player performance to set the handicap.

Gungame in Counterstrike basically does the same thing. The more kills you get, the worse your gun gets. You may end up with just a pistol while other players still have assault rifles. But, everyone’s still playing Counterstrike.

Gungame in Counterstrike basically does the same thing. The more kills you get, the worse your gun gets. You may end up with just a pistol while other players still have assault rifles. But, everyone’s still playing Counterstrike.

Gungame is like a handicap, but it’s not. A poor player can’t possibly hope to win at gungame against skilled players. It would only be a handicap if each kill were considered to be a win in and of itself. To actually handicap gungame you would do something like force the stronger players to start with knife and end with knife. Or maybe let weaker players have p90 the whole game.

That outro is one of my favorite videos.

I remembered an example of handicapping, or reverse rubberbanding. My brother-in-law rides his mountain bike with a group, and him and a few others are way stronger compared to the group on average. The paths they ride have lots of gates between fields. Whoever gets to the first gate first opens it, and then holds it open until the last rider in the whole group has passed through. They are then at the very back of the group. Whoever gets to the second gate has to wait until they are through until they then join the group at the very back.

So the winning goal is to be the person who opens most gates. It means you have overtaken the most players of anyone else in the group. Many people never get to a gate first, so they just get a fun ride in the country. The people who are really fast actually serve the interests of the whole group, get to “race”, and overall the group stays mostly bunched up.

IDGI. Am I missing an obvious joke, or just being dumb?

I want to see tennis with progressively smaller rackets.

I remembered an ancient article I read about Gilbert Arenas, the former NBA star now best known for drawing a couple guns in the locker room during a fight and telling his own teammate to choose one. 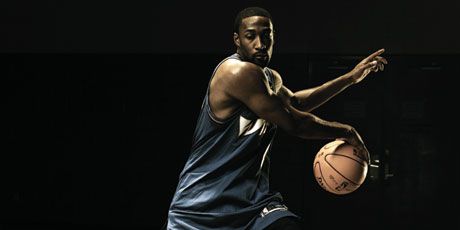 The Pathology of Gilbert Arenas

As the Washington Wizards point guard is suspended during a gun investigation, get inside his head with this shocking analysis of his psychosis

he will take on all comers at Xbox. He won’t just beat you. He will beat you by as many points as you want. Just name the amount. He treats it like a golf handicap. For this game, he’s giving away two hundred points to his friend John, who has flown in from L. A. for a visit. It’s the Cavs versus the Wizards all over again, except this time Gilbert has the Cavs.
He knows every kink of NBA 2K6–and how to exploit it. He has shifted LeBron to guard and put his team in a game-long full-court press. He is playing against his video-game self and doesn’t like the way John is using him. “You gotta get me square to the basket,” he says as the Game Gilbert misses a shot from twelve feet. “You gotta get two point guards in there.”
There’s a minute and a half left, and Real Gilbert is up by 191. Then Game Gilbert gets a steal and throws a long pass–only to have LeBron pick it off. “Sorry, Gilbert,” says Gilbert. “You can’t stop the King.”
As the game ticks down, the Cavs and Gilbert–Real Gilbert–are up by 201. John has the ball and is running the clock down for the final shot. At the last second, Antawn Jamison flips in a layup that makes it 331-132. John screams, circling the room, knocking magazines here and there. The man just got beat by 199 points and is ecstatic. Gilbert shakes his head.

A long read about Tim Donaghy, the NBA ref who bet on games for years in the early 2000’s, got caught, and went to prison.

Since it all went down, the NBA has insisted he didn’t actually fix any games, only bet on them. Which seems ludicrous on its face to me. This report says yes, he did fix games, duh.

I remember when this was news. He just fixed games by calling fouls and such, right? There weren’t any players cooperating with him, right? He couldn’t exactly fix a game if it was too big of a blowout for him to fix it.

Right, mostly fouls, but also traveling, illegal defense, etc. The article does say he admitted he couldn’t fix the spread if it was too much of a blowout.

No players have been implicated. A very interesting aspect of the report is the allegation that the NBA itself leaked the story to the press to stop the FBI investigation. Once they flipped Donaghy they wanted him to wear a wire and incriminate other refs.

No players have been implicated. A very interesting aspect of the report is the allegation that the NBA itself leaked the story to the press to stop the FBI investigation. Once they flipped Donaghy they wanted him to wear a wire and incriminate other refs.

The problem is there is no easy fix for the subjective rules of basketball. Luckily, the subjectivity is hidden from fans more than it is in soccer since it comes in smaller doses. Getting a couple free throws in basketball doesn’t seem like a big problem when there are almost 200 points scored in a game.