GeekNights Thursday - Water in the Ceiling

Tonight on GeekNights, along with special guest Judith of Gay Breakfast fame, we consider the surprisingly common situation wherein one is confronted with water in the ceiling. In the news, white people are weirdly obsessed with throwing axes, the real NHL draft is something to see, and the next GeekNights Book Club book will be Troy Denning's Pages of Pain.

My google fu is failing me, I want to post the Abby Howard webcomic about water in the ceiling but I can not find it.

I too wanted to post this and in a cursory search couldn’t find it. 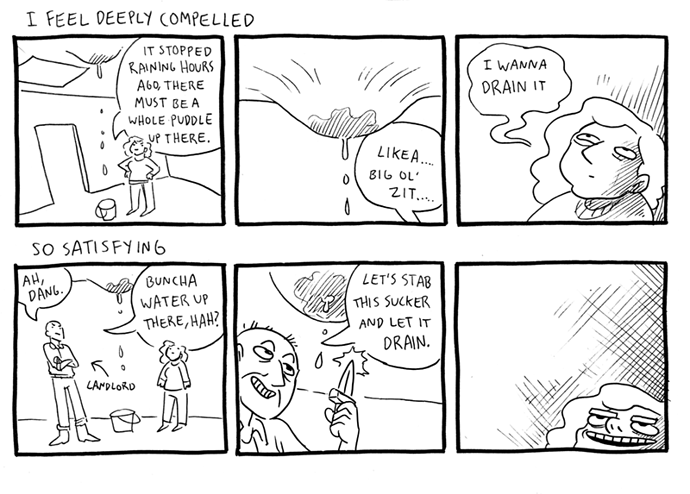 (“abby howard water in ceiling” were my search terms.)

I didn’t even remember Abby Howard drew it. I just remembered seeing it in my TL and forgetting where it came from.

They really trying to be this cool, but can’t:

We did hatchet throwing in scouts, it was pretty cool just to do it for funsies but the sport tech-bro thing is fucking dumb.

Nobody has any water in the ceiling stories to share? I figured everyone would have at least one.

I have some, but they aren’t distinct enough to be worth sharing.

Ok, you want a water in the ceiling story, it’s not a good one it’s just the most memorable one:

One day when I was a wee lad (maybe like 14) I woke up to a weird sound. Can’t really describe but something was happening roughly every thirty seconds. Definitely included some draining water sounds.

Then I get up and feel that my floor is both wet and hot, I squish my way across the carpet and out of my room where my dad is panicking. On this day I learned that panicking people are fucking useless. Unable to address the obvious cause of their problem even when presented with the source.

He’s going on about how the pipe above the garage must have brown and is hitting the garage ceiling with a crowbar trying to drain it. No amount of me telling him, the leak is in my room, above the floor would stop him destroying his ceiling.

Realizing he was a lost cause, I went back to the hot water puddle and looked around for the source.

It was the radiator. I actually have the section of pipe that burst. The plumber let me keep it. 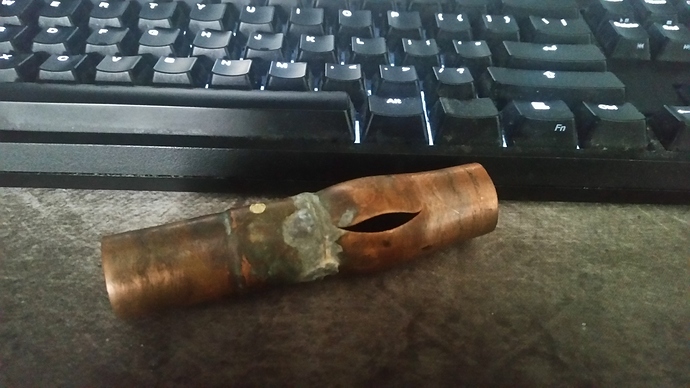 Pages of Pain the most expensive bookclub book yet?

Used book store will also probably have it, and it will be like $3. It seems like it’s just a lot of money online. Maybe there’s a profit to be made doing some arbitrage and getting copies cheap and selling them online.

Rebellion! Everyone read the Lukenights book instead.

In my old townhouse, when my daughter was <1 year old, I went upstairs and started running the bathwater. Then I went back to check on the kid, and I don’t even remember what happened, but it was a situation. Vomit or shit or both. Totally took over my brain. Cue to 5 min later as I am wrapping up said situation, and I hear an odd noise. I was raining in the living room. Raining hard.

I dug out a lot of ceiling sheetrock wherever it was wet. I probably should have dug out a hell of a lot more due to mold risk. Patched it up and painted as best we could (did I mention we were about to list the property as a rental?). There were always these weird streaks in the ceiling where you could tell I had done heavy patching, so I was worried I’d have to fix it up nicer in order to sell one day. Also was worried about secret mold long-term.

Then, through the combination of a defective dryer and some tenant idiocy years later, a load of towels caught fire in the dryer. Smoke throughout the whole house. We were already over my deductible to repair the carpet and paint in the immediate area, so I was able to get the painted to re-do the whole downstairs ceiling as part of the insurance job (looks beautiful now). Still now hint of mold after 7 years, so here’s hoping.

Also yes. It’s all on Rym for picking an effectively out of print book. I will never do you dirty like that.

Just so everyone is up to speed, I finished this book yesterday and it’s incredible. I’ll review it on my podcast in full on Sunday, but it’s going to be a 5 star book. In the 12 years I’ve been recording my podcast, this will be only the 11th novel I’ve awarded 5 stars.

Ninefox Gambit, my suggestion for the Geeknights book club pick, is another 5 star book.

I’ll choose it on my next pick unless Scott does.

Nobody has any water in the ceiling stories to share? I figured everyone would have at least one.

Nope. Weirdly enough, never had a problem with water in the ceiling.