You’re fine if you do that. Definitely not a bad person.

I think the issue they have is that they don’t like the hassle of figuring out what nonsense to put on the pizzas so everyone is happy.

I kinda agree, I shy away from pizza in the modern era because I know what a pain it is.

What categorizes as “American Food?” Does it only count depending on the region? Cause I’m curious if you are fine with eating a Garbage Plate one day and then have a Lobster Roll the next day. Or maybe Pork Ribs w/ Collard Greens next day.

There are a wide variety of perfectly valid reasons to be picky with food such as dietary restrictions, allergies, morals (veganism), genetics (cilantro, supertasters), religious beliefs, etc. Of course everyone also has different taste in food. Everyone is going to have a FEW things that they do not like and will not eat. I don’t think there are any people, other than those who are literally starving, who will be willing to eat absolutely anything.

Now, if someone is still an overly picky eater, without any valid reason, that is a different story. Overly picky eating habits say a lot about a person. It tells me the person is uncultured. It says that person has a fear of the unknown and lack of adventurousness. It shows a lack of curiosity, which is a major component of anti-intellectualism. It shows that the person is small-minded and close-minded. They do not want to explore the world to find new and great flavors, but are content with the few flavors they are comfortable with. They just want to stay in their tiny little comfort zone and never leave. You are what you eat. Someone who only eats vanilla is probably a vanilla person. A vanilla person is a boring person. That’s the literal opposite of the Dos Equis guy, the least interesting person in the world.

What is even the point of living if someone is going to avoid new experiences and just do the same things over and over? The core message of GeekNights is that geeks should not focus entirely on one area of geekery. Explore the wide world of geekery, since life is too short to spend it on nothing but Star Trek. The same applies to food. Someone who eats only chicken fingers and fries is no different in my eyes than the guy who only reads Silver Age Spider-Man and no other comics. In fact, i would not be surprised if the person who only reads Silver Age Spider-Man is also a picky eater. I might even bet on it.

As for plain pizza, yes. If you are at an event where pizza is ordered in bulk, there will be a lot of plain pizza for practicality reasons. If it is good pizza, even plain will still be delicious. I will gladly eat plain slices in such a scenario. Just last week I ate a delicious plain slice I received for free as a promotion at a store. But given the opportunity to order any pizza whatsoever, how can any actual adult intentionally choose plain when other options are available? Maybe once in awhile the mood for plain pizza will strike, and that’s just fine. But to prefer plain, tho choose plain every time, and too refuse to eat non-plain pizza is a behavior I view very negatively.

Just the other day our team at work was able to order BBQ for lunch. Almost everyone on the team ordered something delicious. I got a brisket sandwhich with cheddar and grilled onions. Another co-worker got a catfish po-boy. Just one person on the team ordered a burger. A plain ass hamburger from a pretty good BBQ joint. If you’re going to go plain, at least order the pulled pork sandwhich, a respectable choice at any BBQ restaurant. To order a burger in that scenario says a lot about that person.

There’s another component to acting like an adult when it comes to food, and that is the ability to eat imperfect food without complaining. For example, artichokes are not my fav. Given the opportunity, I won’t choose to eat them. But unlike octopus, which I absolutely will not eat for many reasons, I merely dislike artichoke. And since life is life, there have been a few circumstances in which the meal I was eating happened to contain artichokes. What did I do? I fucking ate it anyway. I didn’t cry, or complain, or pick all the artichoke pieces out. I didn’t act like a needy asshole towards people who were so kind to give me food by asking them to do more work and make a special exceptional food just for me. I just ate the artichokes. I had no valid reason not to eat them. They weren’t going to kill me. They were far from my first choice, but I ate them anyway because that’s how adults behave.

TL;DR: If someone is an overly picky eater without a valid reason (although there are many valid reasons), then I will judge them and lose respect for them.

I don’t know what counts as American food. Because I am American and have lived in the US my whole life, my brain thinks in a US-centric way. My best efforts have only reduced, but nowhere near eliminated, that kind of thinking. So what ends up happening is “American” food gets subcategories and most other countries do not. A lobster roll would end up counting as seafood, but a fish taco counts as Mexican food.

The point is that I just have a system to enforce variety. I cant eat the same thing over and over. I won’t eat a hot dog, hamburger, or sloppy joe the day after eating a garbage plate, because that’s the same “kind of food.” It’s just that “kind of food” doesn’t have any clear definition that will satsify you.

There’s a few things where if you put that shit on my pizza I’m just gonna probably not be very enthused about the pizza.

Olives are on that list, unfortunately they are also a common thing on some pizzas.

I will probably have a slice. If the olives are like, right there staring me down I might try and pawn them off on someone I trust who is going to say “fuck yes give me those olives”. Or if Im around people who don’t give a shit I’ll just be that guy and remove them to salvage an otherwise solid slice. If that isn’t an option, and my only option is olive-clad pizza or nothing, I’m going to have just the one slice most likely.

I mean I can physically eat them, but the flavor is so overpowering and distinct and just, why?

As for actual snacks, my favorite go-to is in fact usually beef jerky or yogurt depending on the mood, but I rarely actually go to those go-tos.

I’m gonna bump this thread after a long time. Hippeas are my new obsession. 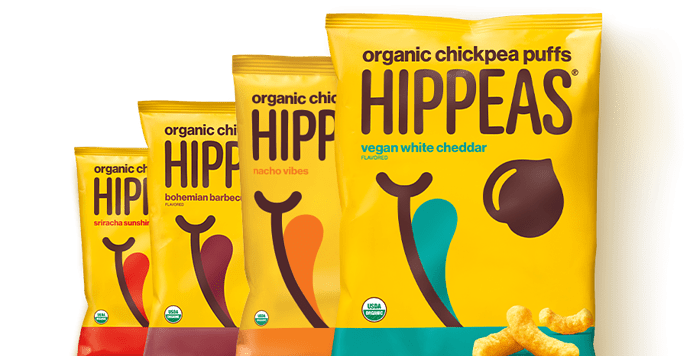 They look and taste like Cheetos, but they’re vegan and they’re soooooooooooooo good.

I originally found these at Costco months ago when they were sampling them (they were in limited stock at the time), then I later found them at 7-Eleven and Ralph’s/Kroger, so they seem to be expanding at a rapid rate, and that’s great, because I’m addicted to these! Find these if you can; they’re absolutely worth it.