Tonight on GeekNights, we review a number of different tech items we've purchased recently. USB Cables, the LG Style smartwatch, the Synology + Series NAS, The WD 4TB Passport Wireless Pro, various wired and wireless headphones, and some other miscellaneous tech. In the news, an Uber self-driving car killed a person, and there's a lot going on with the Cambridge Analytica/Facebook data breach.

As the dedicated “BeatsX Fan”, I’ve got to point out that they do connected to any Bluetooth audio device, if the device supports Bluetooth audio. The BeatsX connects to Android phones and all kind of things, not just to Apple stuff (though pairing and switching between Apple devices is way easier).

"Almost every other piece of mobile consumer tech these days has the ability to share audio via a Bluetooth connection, allowing you to use wireless headphones when playing. It doesn’t seem like we’ll ever get this feature with the current model of the Switch, but there is a solution - although it requires additional outlay and doesn’t work quite as well as you might expect.

To pipe Bluetooth audio to your fancy wireless headphones (or speaker) you’ll need to purchase a Bluetooth transmitter. Lots of companies produce these, and prices start very low indeed - making this a pretty cheap fix." 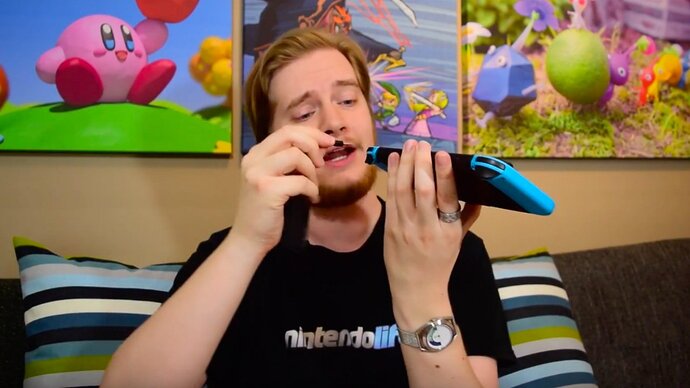 You Can Use Bluetooth Headphones On Your Switch, But There's A Catch

Other Bluetooth headphones have holes that allow connection of a standard audio cable so they can become wired headphones.

Ah I see what you mean now. My previous Bluetooth headphones didn’t have that feature, so I didn’t understand what you were getting at.

With respect to the whole self-driving cars are safer, even with some fatalities, than human driving cars, I’d like to point out that there is an error in that argument. That error is that there currently is not a statistically significant number of self-driving cars on the road to fairly compare the fatal accident rate to that of human drivers.

For example, looking at the Insurance Institute for Highway Safety statistics, 2016 (the most recent year they have numbers for) had a fatal accident rate of 1.18 per 100 million miles driven, or, by population, 11.6 per 100,000 people. Now, assuming I didn’t mess up my math, that means that, based on the number of licensed drivers in the US, there was a 0.01% fatal accident rate in the United States in 2016, which is a pretty tiny rate when you think about it. Until we have a statistically significant number of self-driving cars on the road to get comparable statistics, the jury has to remain out as to how safe current self-driving car tech is compared to human drivers.

That’s not to say the tech can’t get better one day… just that we don’t know for sure if it’s better now.

Also, I can’t help but think about airliner automation when thinking about this. Granted, it’s not an apples-to-apples comparison since airline pilots have a significantly higher skill level than the average driver, but for decades there has been an argument that airliners need to be more and more automated to make them safer. However, recent accidents involving failure of automation has returned to putting an emphasis on manual flying skills to handle situations where the automation fails for some reason.

Finally, I’d feel much more optimistic about the safety of self-driving cars if the tech was being developed by companies with a history of developing safety-critical technology, like airliner avionics companies, for example. They have spent decades coming up with processes and procedures for making their tech safer and the general computer industry is lagging far behind, mostly because of their “ship now and fix bugs later” mentality. One of the highest quality and most stable software packages ever written was the Space Shuttle control software, and it was written using processes and procedures to ensure its quality that would be considered way, way too slow and cumbersome for the average tech company.

There is definitely an argument to be made as to whether or not at this exact moment self driving cars are safer or not as safe as human drivers in certain situations. But the point is, it’s close. The main difficulty in getting an exact determination is not just the amount of data, but the number of variables. Which drivers, which roads, which conditions, etc.

I mean, are self-driving cars EVER going to be as good at driving as Michael Schumacher was? Are they already better than teenager with a learner’s permit?

Whether they are safe or not at this exact moment is only a secondary matter. My main point is that we should not hold them to some impossible standard of being perfectly safe and never causing any accident ever. They just need to be safer to even a small extent. There are so many cars, so many drivers, driving so many miles, that even if the self-driving cars are a fraction of a percent safer than a human, then every human driver who is replaced by a robot car will result in reduced death and injury to humans, animals, etc.

Seeing as the path to making safe robot cars is clearer than the path to making human drivers better, we should be putting many more resources into making them than we are. Deploying them widely now will mean that the time they become safer and better will be sooner, and lives will be saved.

But the point is, it’s close.

Spoilers: It is not. If you ask the people at the forefront of research, instead of the forefront of advertising it to customers and making sales targets, you’re looking at minimum ten to fifteen years just to get to level four - a step below true self driving - unless big, unforeseen breakthroughs are made.

The problem is, you’re basically saying “Oh, if you discard the external variables that make them unsafe, they’re perfectly safe!” Not acceptable. People’s lives aren’t fodder for beta testing your tech dreams, no matter how many arguments you can make about ends justifying the means. Do you want to be shitty like Uber? Because that’s how you end up being shitty like Uber.

The funny thing is, if it were some other tech that you didn’t have a hard-on for, and we were talking about people saying “Fuck it, people will die, but in the end lives will be saved after we’ve sacrificed enough lives on the altar of our technology” you’d be up in arms, talking about moral imperatives and slippery slopes, and probably how anyone who actually did that should be the fuck in jail.

Are they already better than teenager with a learner’s permit?

No. Right now, current self-driving technology that is even remotely close to consumer release can’t even properly hold it’s lane, and most Learner drivers can at least manage that much. The really advanced ones, the cutting edge prototype stuff, can’t even deal with streetsigns or traffic lights if the sun is pointing the wrong way, and have a weird tendency to come to unsafe stops at green lights, and breeze right through red lights. Learner drivers might be annoying, and less safe than experienced drivers, but they’re still better than the best self driving tech available right now, if you consider them in the environment that either one will typically be operating in.

I’ve noticed coiled braided cables are becoming popular in the mechanical keyboard world. The problem I want solved with cables at the moment is just… my stupidly long headphone cable likes to bunch up. Kinda wondered if a coiled cable would not have such a twisted up problem when left alone for extended periods.

I do not know why people like the braided cable. It’s good for nothing except for wired landline telephones, which are long dead.

Let me get this straight, Rym gets on people’s cases about using a Roku stick instead of buying a full HTPC, but he uses his TV speakers? That’s like four times the QoL for a fourth of the price.

I would give up my surround sound long before I gave up the HTPC. Access to and control of the content is vastly more important than just the audio quality.

Unless the speakers are REALLY bad, I cannot tell the difference in sound quality. Straight out of the television and nice speakers sound the same to me. Headphones and earbuds I can tell, my $10 throwaway Skullcandy earbuds don’t sound anywhere near as good as my $80 over the ear Skullcandy traveling headphones which sound nowhere as good as my $150 Astros.