Tonight on GeekNights, we consider the crashiness of Scott's computer. In other news, we're back from back-to-back MAGFest and PAX South (there is video from our PAX South and PAX Unplugged panels), after the longest hiatus in GeekNights history, Microsoft finally adds ssh support (RIP Putty), video cards are overpriced thanks to a pyramid scheme, the socio-tech divide grows ever wider, and there may well be no real correlation between stock price and security breaches.

I think Scott’s just breaking it so he can get a new one.

I saw a Twitter post of someone who had gone around New York and New Jersey and bought up every 1080 they could find and had a pile of like fifty or sixty cards. Its because of this shit that a friend’s girlfriend bought a 1080ti for $2000. I can’t fucking belive this crypto shit. I don’t usually agree with @apreche and his guillotine justice but in this case fuck these assholes, heads should roll.

Well, I mean, you can’t fault someone for buying something that is valuable to them. It’s the same issue as PAX badges. Demand > Supply.

The photo was accompanied by a caption about their intent to use them for mining.

I saw a Twitter post of someone who had gone around New York and New Jersey and bought up every 1080 they could find and had a pile of like fifty or sixty cards.

Omnutia sent that one to me just a few hours ago, albeit in screenshot form. 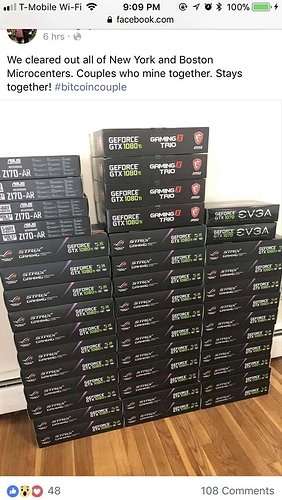 Hopefully, the new specialized crypto mining cards will help bring prices down some and reduce demand, too.

their intent to use them for mining.

You know, it doesn’t really matter. You can buy a video card and use it as a coaster.

Look at all the hacker nerds who bought PS3s to use as computers, not game consoles.

So Microsoft still fucked up apparently, from the article you link -

That’s the one! I got some the details wrong in remembering but Christ that’s $20k worth of cards at msrp being used to launder other people’s ill gotten money and fuck up the environment.

@SkeleRym Those are my main objections. I get that people buy all sorts of things for unintended but effective purposes, like the PS3’s, but this is causing headaches for people who want them specifically for that intended purpose on top of other ills coming from it.

Has anyone had the hot take, that when the value of bitcoin and all crypot-scams that it underwrites collapses will there be a market flood of cheap cheap titans and 1080s?

What if it doesn’t happen though?

The problem is I’ve had that thought but by the time I think that happens there’ll be better cards on the market so they’ll be not useless, but not ideal. That’s why I think this is somewhat amusing. The only investment that is being made is in crypto currency. Those cards won’t retain any value. I don’t know how easy it is to mine new types of currency but it’s just an interesting gamble because you’re not even guaranteed to get any shares in the market, you’re investing in the possibility of getting a share.

Not all the currencies work the same. The ones that people are using GPUs on are basically paying out a few dollars per hour. As long as the coins retain value, a pile of GPUs are basically working a minimum wage job for you. It won’t take long for them to pay for themselves, even if you overpay for the cards themselves. We need the coins to crash or the GPUs to not help mine the coins in order for people to not want the GPUs anymore.

Is that offset with power consumption?

The guy I was speaking to was a guy who built and sold those boxes which is what peaked my interest. This is the guy the selling shovels in the san fransisco gold rush, he’s where the real money will be made.

I had the idea that we could potentially calculate the heat these things output and have them selectively operate like when the temperature in your house drops below some number.

Point is if you wanna actually make money for reals using peoples hopes and dreams with play money, sell them play money makers for real money. Probably a fortune to be made on the backs of idiots.

I wonder how much the GPU makers have made on this craze.

Their revenue per day on GPUs is probably down overall.

I fail to see how you have arrived at that conclusion.