Tonight on GeekNights, we consider scanners. Ancient devices used to convert paper documents and photos into files on computers, often using something called TWAIN. For many consumers, they have been replaced by "smart phones." In the news, NVIDIA releases open source GPU drivers, hell has frozen over, Russia appears to have lost custody of a relatively intact Krasukha-4.

Aw, it’s NOT about the movie where the dude’s head explodes?
What a shame…

I own two scanners, one is a flatbed that came with my all-in-one printer. The other is for my project and waiting for a good time to get it started. CZUR Aura Mate Pro - Speeds & Simplifies ALL Your Scanning Needs

Apparently, if you want to make sure you can scan a book and not damage it there is a very deep rabbit hole you can fall into.

I don’t condone, but I understand.

I actually understand how the call can happen though.

If they were just looking for incontrovertible evidence that the puck didn’t cross the line, I’m not sure if that’s clear from the video. It doesn’t look like the puck crossed the line, but it’s not 100% clear.

So it seems that’s the only thing they are reviewing: did it not cross the line.

It reminds of the bizarre instructions to some juries. For example, they must answer the specific question “did this cop feel threatened in this situation?” but not the more obvious question “was the cop in the wrong when shooting the unarmed black child?”

I have studied the NHL rulebook once more. I have learned the following things, which I will paraphrase. You may read the rulebook yourself if you want the precise language. I see no reason to copy/paste it here.

Rule 20.6 and 21.5
Any time an on-ice referee calls a major penalty or a match penalty (game misconduct), they must immediately do a video review of their own call. The situation room in Toronto can only help with providing video, and can’t help in decision making. After reviewing video of their own call they can either let the call stand or reduce it to a lesser penalty, but not cancel it altogether.

Rule 37.1 and 37.2
There are on-ice officials. There are in-arena off-ice video goal judges. There is a situation room (Toronto). Every single goal in every NHL game is reviewed by the situation room. All of them.

If the situation room notices an issue with a goal, they will delay the restart of play until they figure it out. If play hasn’t stopped (on-ice refs missed a goal), then they wait until the next stoppage of play.

Let’s say team A scores, everyone misses it, play continues, and team B scores. The situation room takes a look. They get it right and Team A’s goal counts. The clocks wind back to the time team A scored, and team B’s goal never happened.

However, let’s say team A scores, everyone misses it, play continues. Then a player on team A or B commits a penalty. When play stops they find out that team A scored. Team A gets a point, the clocks wind back, but the penalty stays even though the game time at which the penalty was committed was erased with time travel. I do not know what the time of the penalty will be recorded as on the score sheet.

Rule 37.3
There are a long list of things that the situation will be looking for when reviewing goals.
Did it cross the line, did it get in before the net came off, was it deflected into the goal off of a ref, did it go through the mesh of the net somehow instead of through the front, etc.

Rule 38 - Coach’s Challenge
There are only three scenarios under which a coach can challenge a goal.

Coach’s challenges can be initiated by the coach. However, during the last minute of the third period, or during any overtime, the league itself will initiate coach’s challenges for the three scenarios listed above.

The language pertaining to irrefutable and conclusive evidence to overturn calls on the ice does not appear in relation to other reviews that are not coach’s challenges. So for all those other goal-reviewing reasons, such as distinct kicking motion, it’s just up to the officials to review the video and determine the correct call. It doesn’t matter what the call on the ice was.

I was trying to determine when the review rules changed, since I was one of the people incorrectly believing the “call on the ice stands.” The above is definitely true, but it appears to not have always been the case.

The Toronto Situation Room was new in 2003. Video review before that (starting in 1991) was a lot messier. In the 2015-2016 NHL rulebook, there is language about what happens “if a review is required” instead.

But one fascinating thing stood out to me. From this article: 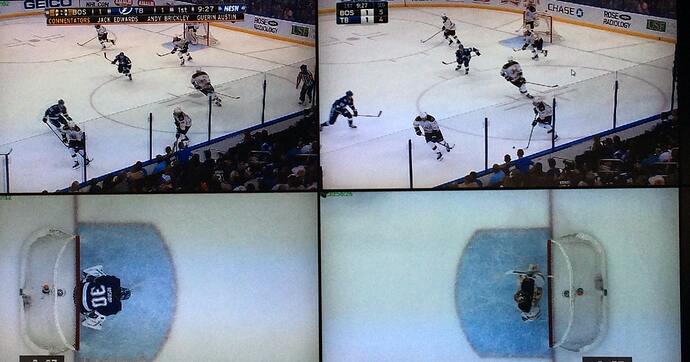 Quality-controlling eyes scrutinize goals and more from a high-tech room in Toronto.

One coordinator is assigned one game. He has three 24-inch screens in his station where he can watch the home and away raw feed (no delay) and different angles, like an in-net view or overhead.

The coordinator has a laptop where he catalogs everything from a game, not just the goals and penalties. If he feels a referee or linesman missed a call or made an incorrect call, he logs it. He logs injuries and embellishments and other in-game events.

Now I wanna see that “real” log. Every missed call. Every injury. Everything.

Also note in the article above that a clearly bad goal wasn’t able to be overturned. The play wasn’t “reviewable” despite it being a direct scoring play. This rule has to be new, starting in the 2016-2017 season at the earliest.

Detroit’s Justin Abdelkader scored the winning goal. Referee Eric Furlatt ruled good goal, but immediately something didn’t smell right to the men in Toronto. It turned out Abdelkader had snapped his stick across goalie Jake Allen’s pads and scored with a broken stick. Not only should the goal not have counted, it should have been a penalty.

There was nothing the Situation Room could do. It’s not a reviewable play.

Obviously, the next episode should be “GeekNights - Scanners (1981)”.

The NBA has a similar setup in Secaucus:

They only publicly release ones where the score was within 3 during the last 2 minutes. But they create the full log for every game, and teams have access to those.

A few years back the Houston Rockets, at the time GM’d by super-analytics-guy Daryl Morey, produced a memo crying about how many points they had “taken” from them in a playoff series. I think NBA officiating is fraudulent, but the memo is a real riot:

“Referees likely changed the eventual NBA champion,” says the memo, addressed to Byron Spruell, the NBA’s president of league operations. “There can be no worse result for the NBA.”
[…]
The full report obtained by ESPN lists 81 total calls, non-calls and violations. It concludes that those 81 instances cost Houston a total of 18.6 points in that game.