Tonight on GeekNights, we consider the humble remote control. We are some of the youngest people who remember having screens and other devices without remote controls, and they changed things in more ways than you might have expected. In the news, Apple is going after Itch.io in its ongoing fight with Epic, Steam rejects some games but not others without clear rules, Facebook rejects adaptive clothing ads, Microsoft changes its old icons, and a major US fuel pipeline was shut down by ransomware.

A fun trick I learned was that you can see the light in the remote control light up if you push a button on it while looking at the light through your cell phone camera.

The start menu hasn’t been in Windows since Windows 3.1. It was introduced in Windows 95. 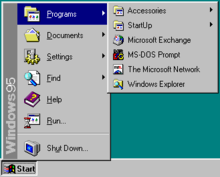 The Start menu is a graphical user interface element used in Microsoft Windows since Windows 95 and in some other operating systems. It provides a central launching point for computer programs and performing other tasks. It has different names in different operating systems and window managers, such as Kickoff Application Launcher in KDE, Dash in GNOME and Unity, and Start screen in Windows 8. Traditionally, the Start menu provided a customizable nested list of programs for the user to launch, a...

Yes. Did I say otherwise?

You did. I wanted to jump in, but I was distracted with the stream chat and we just moved on.

The Start Menu was one of the biggest marketing points of Windows 95. It was a Big Deal and it centered prominently in their ads.

I know I was there. I must have just used imprecise language.