Tonight on GeekNights, we talk about the current state of PC cooling and a little bit of the history around it. It's a golden age, and the consumer market has got your back. In the news, Nvidia releases beta Pascal GPU drivers for hackintoshes, and cops are using GPS darts to avoid dangerous high speed chases.

Support GeekNights on Patreon! Subscribe to both Rym and Scott on Youtube! Watch our latest lecture on Quitting!

You guys forgot about thermal paste! Proper application of thermal paste on heatsinks is CRUCIAL so you don’t fry your nice new CPU like my friend did. MORE IS NOT BETTER. There are a bunch of guides out there on how to apply paste properly depending on your CPU and cooling setup.

In the other thread I just mentioned it. It’s not that important as long as you have some.

Most modern coolers come with thermal paste pre-applied, and there is zero reason to replace it. Technique literally has zero effect as long as you don’t put too much on. But most people shouldn’t have to ever touch thermal paste in 2017.

I’ve noticed that, it’s been true for a very long time. I used to be an idiot highschool student and would wipe it off and replace it with the fancy one I bought but nowadays, I just leave that shit alone.

[quote=“Naoza, post:5, topic:648, full:true”]
I’ve noticed that, it’s been true for a very long time. I used to be an idiot highschool student and would wipe it off and replace it with the fancy one I bought but nowadays, I just leave that shit alone.
[/quote]Yeah, the only times I’ve re-applied paste is when I’ve pulled my cooler off or my CPU out for some reason, which has happened basically three times since I got this computer in 2011(Once when I upgraded my cooler, and it didn’t come with paste on the contact surface, once when my motherboard died and I had to swap in a new one, and once when I had to switch out a fan when it died, which required pulling off my whole cooler because it was in a pain in the arse spot and my CPU cooler is…let’s say, it’s not exactly the smallest on the market.)

I actually had to take apart and re-apply paste to my laptop a few weeks ago, I pushed that poor thing to within an inch of its life. I actually tore it apart originally because it had snapped a few of the blades off of its cooling fan, so I figured while I was in there it couldn’t hurt.

Depending on your case I slightly prefer the big tower coolers to the small closed loop liquid coolers. Liquid still has a higher failure rate than I would like, not frequent but it’s probably like double the rate of heat pipe failure. Both rely on being sealed and can dry up. Probably only biased because I have a box of dry closed loop systems that were being thrown out I keep for spare parts.

Cheap heatpipes are highly reliant on having the cold end above the hot end (nicer ones have better wicks to pull the liquid back to the hot side) as a result many laptops will operate very poorly if they’re upside down or on their side. I don’t think this is as big an issue in desktops, but I wouldn’t be surprised to see some hardware bench marking differently in horizontal cases.

Oh weird its been a few years since I built a new PC and my CoolerMaster sink didn’t have pre applied paste, it came with a ketchup packet of paste.

[quote=“panfriedmarmot, post:9, topic:648, full:true”]
Oh weird its been a few years since I built a new PC and my CoolerMaster sink didn’t have pre applied paste, it came with a ketchup packet of paste.
[/quote]Not that weird, most Noctua coolers come with no pre-applied paste, just one of those mini-syringes of paste.

The pre-applied paste is usually a square of goop on the stock Intel coolers. Standalone coolers sold to nerds usually make you put the paste on yourself. It’s the same kind of marketing/product design that results in brownie mix where you have to bring your own egg instead of just adding water.

What about computers immersed in oil? 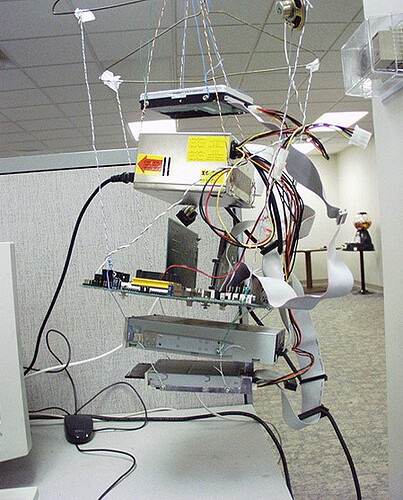 7 Strange Ways of Cooling Your PC

Some professionals and power users require extreme cooling to keep their computer systems at a safe temperature. If you fall under those categories, here are seven strange methods to keep everything cool, though we don't recommend new modders...

What about computers immersed in oil?

Ahh, that silly nonsense. Most people who try it seem to forget that such a fluid requires more circulation power than air, that it can wick up cables and out of the case, etc… Even crazy PCs with insane overclocking are best cooled by spot cooling devices, and I’m hard pressed to give even a token use case for immersion in PCs.

[quote=“SkeleRym, post:14, topic:648”]
I’m hard pressed to give even a token use case for immersion in PCs.
[/quote]Display models. They’re great show ponies, When set up right and with a little flair, they look very impressive to your average punter, they make it harder for sticky-fingered attendees to swipe shit, and they don’t have to run hard or long-term. I can’t think of any others worth mentioning.

There’s also a number of other problems - For one example, a lot of people do dumb shit like assuming that the thermal mass of the oil is enough to keep their computer cool, when you really need a pump-and-radiator system(And the bigger the radiator, the better) to cool the oil. Which has also led to a bunch of destroyed furniture, carpet and the like, because fun facts, the specific heat capacity of most mineral oils is higher than the safe temperature for one very important component. No, not any of the PC components - I mean the acrylic that 99% of the tank/cases you can get are made of.

And when that hot Acrylic, which is also under pressure from the weight of the mineral oil, bends and cracks from the stress, the best case scenario is a nasty leak that requires complete disassembly and replacement. The worst case scenario? Well, let’s just say that Bob Ross wasn’t the only dude who could make an impressive waterfall in oils.

I hope the warden of that prison brought those prisoners up on stage like in Mathilda and said, “these guys are the reason you can’t have computer class anymore.”

What are people’s thoughts on graphics cards that come with their own water cooling? I’ve never done water cooling, so I’m a complete noob in that regard. However, my tiny little HTPC case with a 970 in it gets waaaaay hot when I am cranking it up for VR and such. Considering an upgrade whenever the 1100 series hits if I can get something with strong and silent cooling.

The Pascal 10X0 series is not only more powerful, but much more efficient than prior chips. Just switching to one with fans you might find your system being cooler.

If you do get a video card with water cooling already attached, make sure it matches well with your case.

[quote=“Tripwire, post:17, topic:648, full:true”]
I hope the warden of that prison brought those prisoners up on stage like in Mathilda and said, “these guys are the reason you can’t have computer class anymore.”
[/quote]Which is unfortunate, because by the look of it, they must have been some pretty effective classes.