Tonight on GeekNights, we planned to talk about portable electricity. Unfortunately, we went long talking about the egregious Equifax data breach affecting millions of Americans, some of the Apple news around iPhone 8/X and iWatch 3, and a shocking turn of events at the W3C over DRM.

GeekNights Forum is amazing, and you should join it! The next GeekNights book club book is The Fifth Season! Support GeekNights on Patreon Stay tuned for regularly scheduled Judge Anime By Its Cover! Watch our latest lecture on Rage Quitting from PAX West!

Here is an open souce take on the W3C vote with one of the two people at the press conference.

Funny you think Apple isn’t doing well with their phones. They keep charging more every year for phone options, and they keep selling more every year. Bigger phone with better camera? They sold more 7 plus than 6S plus after raising the price. It’s bonkers. They’ll be fine with the iPhone 10 selling at more than $1000.

@SkeleRym @apreche What are you two doing that you need more than 64 gigs of storage on a phone? I had 64 gigs on my Nexus before I replaced it an only ever filled about 20 gigs. 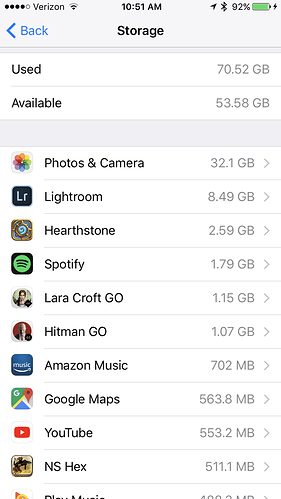 The only reason I have that much free storage is because I pay a dollar every month to Apple for iCloud photo storage. Without being able to offload the photos like that, I would be nearly full.

Here is the storage on my iPad pro. Yay video editing!! 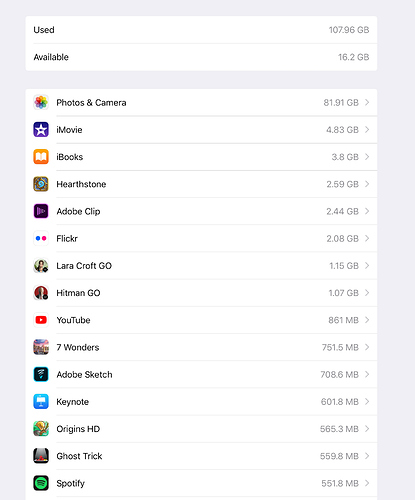 Ah right I forgot you do video editing right on your portables. I don’t take a lot of photos or videos so the only thing that takes up a lot of space for me is games and music.

Man, an endoscope would be so incredibly useful to keep in my geocaching pack.

Music and podcasts take up my space. I don’t like streaming music. Prefer to buy. 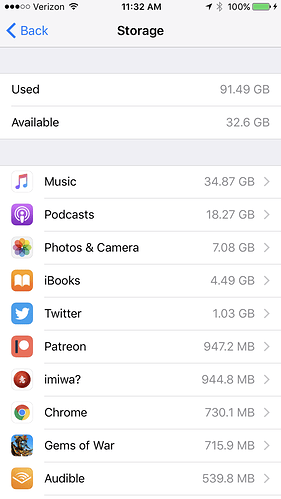 Definitely will listen to this as I have NO idea about the new iPhones.

Why do you waste your money buying music?

Because I like to support artists? Streaming gives them shit for $&&.

If you streamed and just send them money, they would end up with more since Apple wouldn’t be taking a cut. Also, streaming allows discovery. Think of all the artists you are not supporting and music you are missing out on because you only listen to what you knew about and bought. Streaming gives you access to ALL the music.

How would I even know to give Yung Bae $10 on Bandcamp if I weren’t for Spotify letting me know they exist?

@Apreche I buy my music via loudr, Bandcamp, pateeon, and direct off the artist website. Streaming allows me to discover and my wallet ensures a support.

But not streaming? Discovery will be so limited.

Also, if I actually bought all the music I listened to on Spotify, I’d be flat fucking broke.

There are a bunch of podcast that help with that, this week in chiptune buys all the music they feature. Find one and listen to a curated list.

I stream my music and buy on occasion. But most new music I find is not through streaming but through other means. All songs consider on NPR, college radio, this forum. YouTube which is streaming but it’s not from my music service.

I mostly listen to music at work, and unfortunately, the entire building has terrible cell reception, so streaming isn’t an option. The only music I can listen to is the stuff I already own.

If a job doesn’t offer unfiltered and working Internet, then I don’t take that job. Not only because I couldn’t do things like stream music or watch YouTube, but also because I couldn’t actually do my job. I can’t think of many office jobs I could do without real Internet access.

Real internet access doesn’t have to include YouTube or streaming services. I have to use the internet for almost everything I do, but those things aren’t necessary, so they’re blocked. Not everyone has the luxury of being able to turn down a job just because they can’t stream music or watch things on YouTube.

I have no objection to the pragmatism sometimes wins out over principal argument but I don’t concede that real internet doesn’t have to include youtube or streaming services.

Off the top of my head: Youtube tutorials are a thing you know you will never need? Know streaming services and speed tests are basically the same thing?

There are certainly thousands of thought of edge cases where you’d discover loss of access to just your examples results in an individual being either ineffective or hindered by their loss.