Tonight on GeekNights, we consider the fine art of destroying data. In the news, IoT hackers use a fishtank thermometer to steal some data from a casino, T-Mobile is fined for faking ring tones for failed calls to rural phones.

We are back (mostly) from PAX East, and you can see both our 40 Tabletop Games panel and our Judge Anime By Its Cover: Spring 2018 shows on youtube!

re: Dogtanian and the Three Muskehounds

I know some things about recovering / destroying data. Most of the recovery techniques that could get overwritten bits aren’t really applicable to anything made after maybe the mid 00’s. Even if someone did recover some data it’s likely there would be enough uncertain bits as to make it legally worthless.

SSDs are complicated because of TRIM and wear leveling. Deleted stuff can entropy out of existence faster but is also more difficult to guarantee removal because there’s an extra layer of abstraction. The controller in the SSD maps the logical blocks of data onto physical bits in flash chips, so destroying the controller would make it very hard to piece back together while not technically destroying any of the bits.

When securely erasing stuff pseudorandom overwrite is better than zeroing because zeroing is very easy to find examining a drive. In practice that could be used to suggest that you’re hiding something, or an investigator might hunt around for references to that block elsewhere on the drive and might be able to recover metadata.

I think I’m the only person on earth who just keeps their phone always in vibrate mode no matter what.

I do this also.

I’m also all vibrate all the time.

Regarding the question of why T-Mo might want to fake ring tones, I wouldn’t be surprised if it turned out they did it for the sake of creating a “better” user experience.

As they are a bit of an industry underdog next to AT&T and Verizon and have a reputation for having less thorough coverage, I would guess they’re very concerned with making their coverage appear as robust as possible. Any delay in connecting or dead-air time is likely to be attributed by the user to crappy coverage regardless of the actual explanation.

I used to keep my phone on vibrate at all times, until I developed vibrating pocket hallucinations so bad I literally thought my phone was ringing or getting messages every few minutes. For my own sanity I had to start using an audible ringtone.

This forum has an above average number of people who always just have their phone on vibrate. (my phone hasn’t made ringing noises since I learned how to enable vibrate on my first phone)

It really is more polite, and being an ivory tower I think the FRC forum has an above average number of people who are self aware and aware of those around them, or at least try to be. If I had my druthers I would keep my phone on vibrate most of the time in public.

The only time my phone is off vibrate (especially now that I have a smartwatch again) is when I accidentally take it off when trying to turn up a video.

This remains my primary UX gripe with smartphones.

They have like 4 different volume contexts, among them are always volume of the ringtone, and volume of like, media initiated by the user but only 1 hardware volume button which changes which of the volumes it affects based on unintuitive context.

I don’t have a solution but it’s very frustrating. Worse still often vibrate is often a setting on this volume slider between the lowest audible sound and no sound or vibrate at all, making an accidental press of either direction likely to lead to you missing notifications you want your phone to vibrate to.

My big gripe is… Who’s changing their ringtone volume that often, compared to media volume?

They should make ringtone volume like a software slider only and in the sights and sounds part of the settings, then watch when nobody complains.

I don’t destroy data but I don’t really go out of my way to preserve it. If that makes me a bad person oh well.

If DBAN can’t read a drive’s size properly to wipe it, is my only option physical destruction? The drive’s mostly dead but I want to wipe it before I chuck it. 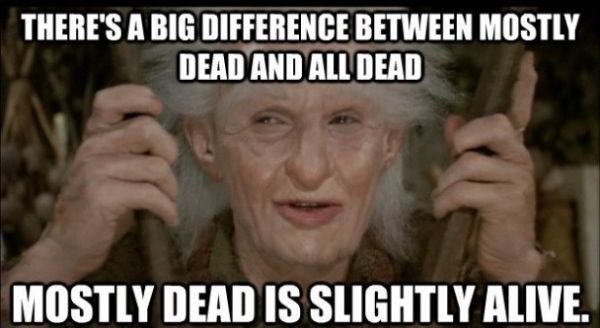 I’d just smash it. Especially for a 2.5" drive, most of those use glass or ceramic discs and will shatter if you take a hammer to them. Generally if stuff like DBAN has trouble with it nothing short of PCB replacement or clean room work will get the data anyway.