I just finished Firewatch, a game I knew was good but just never gotten around to it. It is the type of walking simulator the “hardcore gamer” crowd hates, but I don’t mind them and I thoroughly enjoy stories and the first person perspective makes such stories a lot more visceral. I did like other games in similar like Dear Esther and Gone Home (which is also directly referenced by an easter egg). The game has you constantly make some choices, whether in the prologue how the backstory of your character unfolded, or how you respond to conversations. I think it would be interesting to see how exactly things are impacted by this, but I don’t particularly feel the need to do so, as I am content with the choices I made.

I won’t go very deeply into the story as it would defeat the purpose of playing the game. If you haven’t played it, I would recommend doing so as it is quite enjoyable and did elicit some very heightened emotions from me. I also very much enjoyed the themes of guilt, regret and obligation woven into the narrative.

Decided to try Riot’s newly out of beta Counter-Strike clone Valorant. Was in winning team both of the matches I’ve played and even got few kills, so I’m basically ready to go pro.

Don’t have anything too deep to say about it, I don’t have enough skill or experience to talk about things like balance. Basic gunplay feels good. Some really nice UI things Riot has done, like showing where teammates are looking at mini-map and if they see enemies, all that pops in the map. Also loud sounds have visual marker on hud, to point their direction, which is nice.

One of the biggest things that surprised me in the game was how small the “no man’s land” in the one map I played was. Most of the map was ether team’s setup zone, defenders could hole up deep in bomb spots and only small hallways leading to both bombsites and small central room were unaccesable before match started. So when round starts, things happen instantly.

I plugged in the Wii and it works, which means I can go back to all the GameCube and Wii games I bought, but didn’t beat. Starting with some Kirby Yarn.

Yarn is fun with kids, you cannot die. There is zero challenge, but it’s ok for a few levels. Kirby’s Adventure on the Wii however is really fun and a good challenge. Pretty too, for a Wii game! What else do you have on your GC and Wii backlog?

Monster Train is an excellent variation of the deckbuilder roguelike. It has a Magic the Gathering feel with summonable units and explosive synergies. There are 4 demon clans; you choose 2 to compose your deck at the start of a run. Your primary and secondary choices determine which hero unit you start with. I haven’t counted, but there looks to be a comparable number of cards and artifacts to Slay the Spire. Runs have far fewer battles with a higher complexity per battle.

What stood out to me is the card upgrade system. Each card has two upgrade slots, with upgrades being very cheap as they only apply to one card. Upgrades range from lowering cost to increasing numbers to making the card hold in your hand until cast. Events that duplicate cards can now give you huge power boosts and money saves.

Difficulty is harder to judge. I achieved the win state on my second run, but there are 25 ascension levels with increasing difficulty. I also got lucky by grabbing an artifact that directly countered the last boss. There are a wealth of offers to upgrade and add cards which gives it a much more planned feel than StS. Highly recommend it. 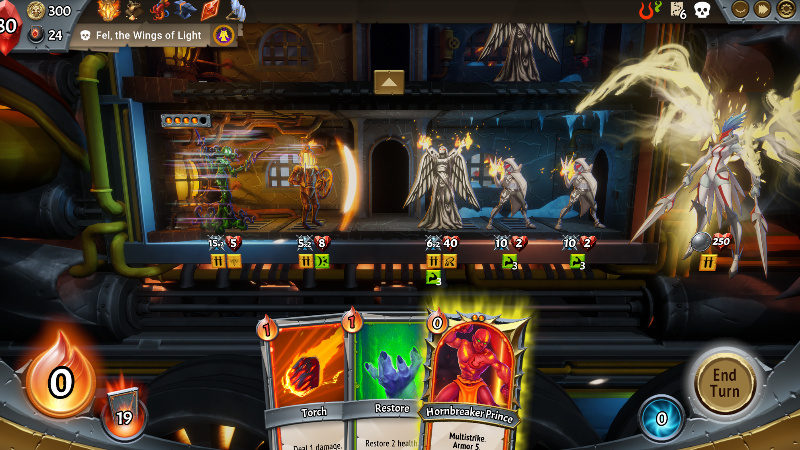 Recently I started watching someone play Zelda BOTW for the very first time on Twitch. It was exciting to see her experience this amazing game. I really missed that game, but I completed all the shrines and max all my armor.
It was then that I decided to get the DLC and check out Master Mode. Master Mode is a game changer, it is super difficult (there was a Lynel at The Great Plateu), enemies’ HP regenerates if you take too much time to defeat them, and finally it takes longer to defeat enemies (which means the weapons degrade faster).
That being said, the game was never boring, it teaches you to be more efficient when fighting, and to see if fighting enemies is worth your time and weapons.
So far I have unlocked the Master Sword, unlock all the Towers, and I am yet to upgrade any stamina wheels. I haven’t use stasis flying either during this run.
If you want to fall in love with Zelda BOTW all over again, I recommend Master Mode, it does not disappoint.

I definitely have considered replaying Breath of the Wild with the master mode. Thankfully my copy of the game is on my friend who lives in another city these days. Can focus time on games I haven’t finished before.

Since it got re-released on Steam for free, I went to play Frog Fractions to the end. When the game was new I only played it enough to find it it went down a weird rabbit hole, then I stopped and never finished. Now that I go back I found out the game is super short! I was deceived. I thought it was going to keep increasing it’s zaniness on and on. Disappointing, but still entertaining. It actually increases my recommendation, though. It takes such a short amount of time and effort to beat Frog Fractions, you have no reason not to.

Fall Guys is fun, but I need a proper controller. Thankfully my birthday is next week so I requested an 8bitdo pro thingy and a Bluetooth adapter.

My coworker is really trying to get me to get fall guys. hmmm.

Just be ready for rampant cheating. It’ll be a while before they fix that I think.

For some reason I’m playing TF2 again and really enjoying it. Game good.

The game loop really got ruined for me once I moved on to Overwatch. Too little ammo at one time, so there is a radically different ebb and flow. It’s very difficult to manage any sort of area control, and positional advantages are subsumed by limited ammunition and rapid reload cycles.

Honestly, I’m just really enjoying the specific feeling of Pyro and Sniper again? Like I agree, I had a blast playing Overwatch, but those two classes scratch some kind of hyper-specific itch for me that Overwatch just didn’t.

Super fun game! I love the looseness of the controls and the randomness. It’s weird because normally those things are hell for a platformer, but with 59 other players bumping into each other it somehow all comes together into a fun experience.

However, there’s one game type that really sucks. There are three-team team levels where it’s literally a “vote who loses” game. For example, in the egg grabbing game, whichever team falls slightly behind at the start just loses. It’s that simple. Both teams just gang up on the team in third place, so it’s not 10 vs 10 vs 10 but 10 vs 20. Neither of the team ahead care who is in first place, only that they aren’t last.

So while losing in every other mini-game, level, race and team event feels fun, losing at a “vote who loses” game just feels bad. It’s not enjoyable.

And weirdly, not losing at the “vote who loses” game also doesn’t feel fun either. It breaks the vibe of the game and bums everyone out.

If there was favorable placing in the next game based on 3 sided team placement, would that help, or make the next game feel even harsher(/too harsh?)

No. What would help is no “vote who loses” rounds.

The other three team games are things like a race pushing a ball, who can jump through the most hoops, etc.

But two of the games are “the team with the least things loses” and the other teams make them have less things by taking them away.

If the least things is just jumping through fewer hoops, everyone is incentivized to jump through more hoops, regardless of team or colors.

If the game is push the ball to the finish line and get first or second, to be sure to win you want to be across the line first, and when that happens your entire team is removed from the mini-game. The two two teams that are left then have a one-on-one race. First is best, then second is needed.

It’s a pure game design/game theory thing. In society we don’t want a majority of people voting against the continued existence of a minority of the population. It feels wrong, and we design democracies to stop that happening.

I was a citizen of a country where part of the population voted to take away the rights and liberties of other people. That was the Brexit vote. To fix it I had to become a citizen of a different country.

Why does playing the “vote who loses” mini-games in Fall Guys make me feel the same emotions as the morning after Brexit results?

What you’re saying about some of the games in Fall Guys is absolutely correct. The team based rounds make for a very political situation where player skill and input doesn’t matter much.

For example, the ball pushing game. Two other teams gang up to push your ball backwards and your team loses, that feels bad. But as a player you are supposed to be out there trolling the other teams. It’s your chance to have fun being the bad guy sabotaging the other teams. And since nobody cares who wins, since it is such a silly game, you can have a good laugh whether you win or lose.

How many times do I have to tell you: “Stop telling me I’m feeling emotions wrong.”

I can’t “just make myself feel a different way about something” just because I know that’s what I should feel so I don’t feel bad. That’s not the way emotions work!

I’m not missing anything about Fall Guys. I know how it is meant to be played, and how I’m meant to enjoy it, and how it’s not serious and everything else. That’s why I said in my earlier post: “Super fun game! I love the looseness of the controls and the randomness.”

But there’s nothing I can do to stop myself feeling bummed out by the “vote to lose” games. Nothing. I can’t tell myself “THIS FEELS GOOD” because it just doesn’t. I’m not a robot who can program emotional responses out of myself.

you need to remove your emotions like Scott here.