Rym claims that only the cake doughnut is actually a doughnut, and any other kind is not a doughnut.

To that I say: No true Scotsman! No semantic arguments!

Obviously, I prefer the fancy ridiculous douhgnuts that you get at someplace like Dough, Doughnut Plant, Top Pot, or cider doughnuts that are made fresh right at the apple orchard.

But honestly, I’ve never met a doughnut I didn’t like. Dunkin’, Krispy Kreme, $1 doughnuts from a street cart, or even the package of mini doughnuts form a vending machine. While all definitely inferior to the high quality doughnuts, I will still eat them. They are all delicious.

I just don’t eat too many to avoid turning into Homer Simpson.

I feel like the old-fashioned donut doesn’t get enough love. 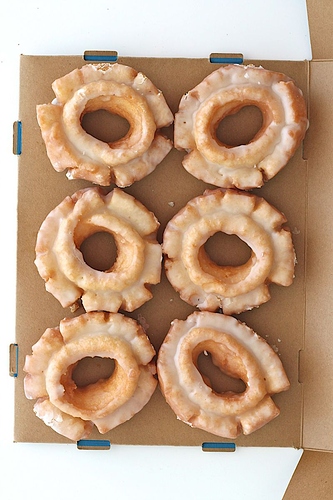 But yeah, all donuts (doughnuts?) are valid, just some are EXTRA delicious.

I usually don’t fuck with yeast donuts unless they’re FRESH, where as a cake donut or apple fritter or such is still delicious the next day.

Yeast doughnuts have their place, and all the fancy doughnut shops have both.

Krispy Kreme is disgusting. Might as well eat uncooked dough dipped in sugar and lard.

Old fashions are the BEST.

I don’t know if I’d go as fast as disgusting, but Krispy Kreme is definitely the Wonder Bread of donuts.

[quote=“Apreche, post:1, topic:833”]
Rym claims that only the cake doughnut is actually a doughnut, and any other kind is not a doughnut.
[/quote]Well Rym is fucking wrong then isn’t he.

But anyway, my favorite kind of doughnut is a bit of an odd one, judging by the opinions of most of my American friends. It’s the classic, just a circle of of fried, sweet dough, rolled or shaken in cinnamon sugar while it’s still hot and fresh out the fryer. When I’m at PAX, a significant percentage of my diet is cinnamon doughnuts from this one place on Flinders street that I keep dragging people to.

Also, I’m not sure if it’s just an American thing, but y’all definitely seem to be WAY more into Glazed doughnuts than everybody else. I can’t really think of anywhere else I’ve been - not that I’ve exactly made any sort of real effort to investigate, admittedly - where glazed doughnuts are the generally accepted default doughnut.

Eating a Krispy Kreme is like eatng a main sequence star that collapses into a super dense neutron star after you eat it and sits in the bottom of your guts for a few days.

And here I am, the odd one out saying that I find most doughnut glazes to be too sweet. Krispy Kreme is one of the worst offenders. (they come with the added drawback that there’s no way to eat one without getting vile, sticky, awful all over your hands)

I have nothing against doughnuts themselves, that is to say baked or fried sweet dough in a ring or small ball shape. But my favourite doughnuts have all been non glazed. Such as the apple cider doughnut and some certain specialty doughnuts that make flavored dough then turn that into a doughnut rather than make regular dough and put flavored icing on them

I especially like the holy doughnut out in Maine, where my coworker occationally goes and brings back these delicious coffeecake doughnuts and dark chocolate sea salt doughnuts.

That shop also has the distinction of having one of the few icings I don’t find too sweet. I think they call it milk glaze. Someone with actual confectioners skills can tell me what differentiates that from regular glaze but it’s smooth rather than saccharine.

Contains doughnuts with saccharine garbage inside them (in the form of creme) 0/10 would not buy again.

Best blueberry filled donut I have ever had is at Ken’s Donuts near the UT campus. For the best glaze donuts I go to Round Rock Donut. The shop also makes a huge donut there. 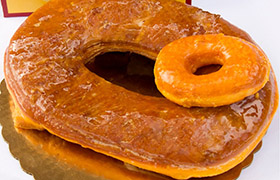 I don’t understand why you guys think making cake in a circular shape makes it special, but whatever floats your boat.

I personally think cake donuts are just an inferior version of cake. Like, I’ll just get actually good cake if I want cake. I like the fluffy, fried donuts with a light sugar glaze. I don’t understand why you would get fried food if you don’t want it to taste like fried food.

I visited this place when I took a trip to Oregon a few months ago (I went to the Eugene location).

Most doughnut places are usually pretty tiny, mainly consisting of four white walls. Voodoo is highly decorated; they blare metal music and have a small arcade. They also sell vinyl music and even have their own brewery. It’s freaking incredible. The doughnut I got there had lavender sprinkles. It was so tasty! They also have a nice variety of vegan doughnuts.

You haven’t lived till you’ve gone to Voodoo.

I am with Scott here. Donuts scale like pizza, even mass produced donuts are basically good.

Not a big fan of powdered sugar all over my donut. Sour cream donuts are top donuts.

Hell yes, the sour cream doughnut is where it’s at! An old fashion or cake doughnut with a sour cream glaze is so choice!

I have heard many tales of this Voodoo Doughnut place. I believe what I heard, but it is not worth traveling to Portland for doughnuts alone.

Recently a Duck Donuts opened up locally and I have to say they make the best chain store donuts Ive ever had. They fry up smaller batches of cakey donuts as people order them so you get them warm. Then they dress the fresh donuts as per the customer’s request. Anything from simple powder sugar/cinnamon sugar to maple frosting with bacon bits. I particularly like the chocolate icing w/ coconut, but that’s me.

Do donuts without circles (that are typically filled) have to be cake donuts? Or can they be yeast donuts? Never overlook the power yeast gives to bread.

They can be both my first job was at a bakery that did yeast doughnuts.