FXX has ordered a 10-episode adult animated series for Deadpool, set to premiere in 2018.

I didn’t realise that Atlanta was a comedy-drama series so I hadn’t watched it and I haven’t actually watched any Glover Written comedy (I have watched some of community so I know that Donald Glover can act comedy.) I think it will come down if they can write it with as much heart as the movie and who they get cast as Deadpool…I am sure Ryan Reynolds is already putting on his suit and getting his boom box ready to stand outside their window to get the part.

I’d be a little more nuanced about it.

Deadpool is funny to people in any of these categories.

Deadpool is basically a comedic device that appears very fresh if all you’ve ever read is underwear comics.

I had very minor exposure to Adam Sandler prior to his movies and somewhat recently watched some of his SNL material. It became apparent very fast that he kinda had one schtick that he carried through his entire career.

[quote=“SkeleRym, post:5, topic:705”]
Deadpool is basically a comedic device that appears very fresh if all you’ve ever read is underwear comics.
[/quote]I somewhat disagree - you’re 100% right about modern/current deadpool, but they did have a long run in the…I think late 90s, early 2000s where they did a bunch of serious storylines, back when deadpool was a funny, justifiably crazy guy in a shitty situation, rather than lolrandom internet memes in character form. Out of the deadpool runs, those are worth reading, since they’re a kinda thoughtful exploration of superheroes, using someone who is both enough of an everyman to be a pretty awful hero, and someone who is trying very hard to be one despite. Back when his fourth-wall breaking was more Bugs Bunny-esque asides about the situation to the audience, rather than the current version where he’s basically just three narrators yelling memes at each other. Almost everything else is pretty much complete trash.

That run of Deadpool did exist, but what percentage of Deadpool fans have read it? Even those that have read it, and recognize it as the best, many still like the bad stuff. The guy in the Deadpool costume at the convention most likely only enjoys Deadpool in his most juvenile and crass manifestation.

[quote=“Apreche, post:8, topic:705”]
That run of Deadpool did exist, but what percentage of Deadpool fans have read it?
[/quote]Considering they’re some of the most recommended deadpool arcs that exist, more than I think you think?

[quote=“Apreche, post:8, topic:705”]
Even those that have read it, and recognize it as the best, many still like the bad stuff.
[/quote]Fair.

[quote=“Apreche, post:8, topic:705”]
The guy in the Deadpool costume at the convention most likely only enjoys Deadpool in his most juvenile and crass manifestation.
[/quote]Absolutely fair.

I have no option on Deadpool one way or the other, but I’ll check out the first few episodes just because it’s a Donald Glover project. Also, I thought I read somewhere that some of the team from Archer were involved.

The only comic book pages with Deadpool on them I own is in Ryan North’s Squirrel Girl run where she owns a set of deadpool branded superhero/villain trading cards.

I’ve read basically every Deadpool comic up to 2017. I can say without a doubt that Rym and Scott are absolutely wrong on this matter.

As with basically every long-running comic book character, it very much depends on who writes the character. Rym and Scott seem very much tainted by Daniel Way’s run where yes, Deadpool is completely “lolrandom jokey jokes”. And you know what: Most Deadpool fans hate that run. (I don’t exactly but I came to it after the fact and didn’t have to sit through it on a month to month basis). That is also the “three voices” run that Churba is talking about and that is not the current situation.

I am currently a lot behind on my comics due to other things I picked up, but the most recent run which was written by Posehn and Duggan (later Duggan alone) are pretty good, though I thought the “Dead Presidents” story it starts with was a bit too jokey. The character works best when the writer strikes a balance between his outwardly goofy persona and his inner turmoil of wanting to be liked by others and living with a horrible past and his inner demons. The original run of Deadpool by Joe Kelly and the Duggan runs are pretty good in this. In particularly I recommend the “The Good, The Bad & The Ugly” storyline from the Duggan run. It is also what I believe made the Deadpool film work in a lot of ways. It is mostly based on the Joe Kelly run and it shows that underneath the jokes is a very disturbed being trying to hide from the world, later made explicit.

Deadpool requires both comedy and pathos and Way’s run failed in having essentially no pathos whatsoever. Unfortunately it is also where most of the “Deadpool is so funny, look at this random page from his comics” stuff comes from that made him a lot more popular. Today he is also a bit overexposed due to a ton of comics he is currently in.

By living on the internet and not reading any deadpool comics, I’ve come to the following conclusions. Old deadpool with different writers was way good and worth my time. Modern deadpool is largely agreed on by old fans as the worst. However…

New deadpool is all written by the guy everyone hates, the videogame, the movie. So the version of Deadpool you’re likely to be talking about with some random shlub is the shit one. It’s also far and away the most popular one.

That all said, I’m with Rym here, it’s funny the first time.

[quote=“chaosof99, post:12, topic:705”]
That is also the “three voices” run that Churba is talking about and that is not the current situation.
[/quote]It’s pretty much where I dropped the book in disgust. IIRC, the exact issue was 'pool in a baseball stadium, dressed as the philly phanatic, killing skrulls.

That is issue 1 of the Daniel Way run from 2008. The three voices is part of his gimmick for Deadpool. Unfortunately it is also part of the very mediocre Deadpool game that they hired Way to write. They later retconned it by explaining that the voice typeset in Courier New, was another character named Madcap who got absorbed into Deadpool before the Way run and pulled out of Deadpool afterward. Didn’t exactly help beforehand with the problem you described though.

Anyhoo, just read “The Good, The Bad & The Ugly”. It’s lightyears ahead of anything Way has ever written for the character. It also features “a different voice” in Deadpool’s head, but at least there is reason for it both within the story (it is a female S.H.I.E.L.D. agent put there as a last resort very early in the Duggan/Posehn run) and for the purpose of the storytelling itself as a decent two-man routine and voice of reason. Deadpool works better if there are other people to interact with which is provided with this.

I saw “TAS” and assumed “The Abridged Series.”

Honestly my first thought was the animated series.

I perfer Gwenpool to Deadpool 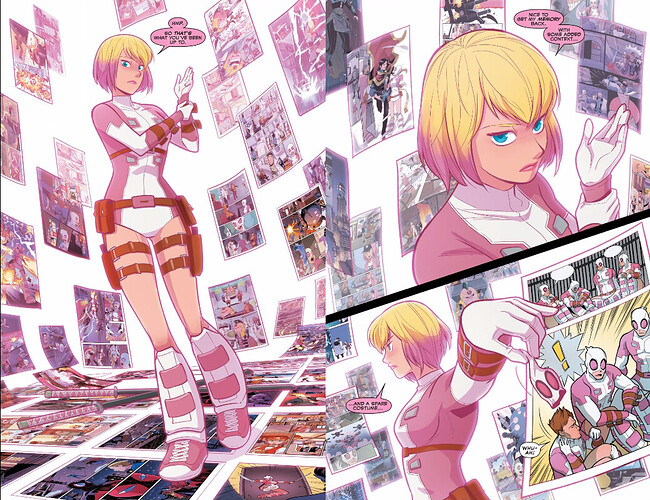