I haven’t really liked a lot of beers. I hear beer is kind of like music where the mainstream stuff is mostly trash and you gotta go after the indie stuff, but I mostly drink at bars where anything craft is too expensive for me. Today, however, I’m trying a Not Your Father’s Root Beer, which is an ale spiced so that it tastes like root beer, and I quite like it. I’ll also be having a Kentucky Bourbon Barrel Stout this weekend which is apparently brewed with coffee? IDK. It’s gonna be a trip.

I can’t drink stouts anymore. I don’t know what changed but my mouth just immediately rejects them. I’ve been going on a sour kick as a result, love the super dry ones, but some veer into vinegar, which apparently some people like.

It’s not uncommon to drink vinegar in east Asian countries. The first time somebody offered me a tiny bottle of apple vinegar to drink I was really confused, but I tried it, and it’s not bad.

Not Your Father’s Root Beer isn’t really a beer. It’s an alcopop that has root beer flavoring. It’s actually enjoyable if you like root beer, but that connection makes sense when you see their other products are Iced Tea, Lemonade, and Mountain Dew varieties.

The best way IMO to get into craft beer is to go to the humble “Mix 6” of your local supermarket. That way you can cover just about every casual style out there: Pale Ale, Wheat, Lager, Brown, Stout, etc. There are national scale craft breweries like Bells, Founders, Sierra Nevada, New Belgium, Oskar Blues, Stone, etc… They make reliably good, dependable year-round beers.

As it’s heating up, I’m aiming to make/consumed more drinkable beers. Just brewed a successful Amber Ale that won 2nd Place in a local competition. Will have a Cream Ale finished brewing by June.

Bourbon Barrel Ale and stout are my favorite beers, and that’s coming from someone who’s not a huge beer drinker. There’s only a few local beers I actually like but the Bourbon barrel beers are great, especially if you can get them out of a tap.

If you really enjoyed the Not Your Fathers root beer you should try their other drinks. Their fruit punch one tastes like alcoholic Hawaiian Punch. I thought it would he awful but it’s surprisingly good. 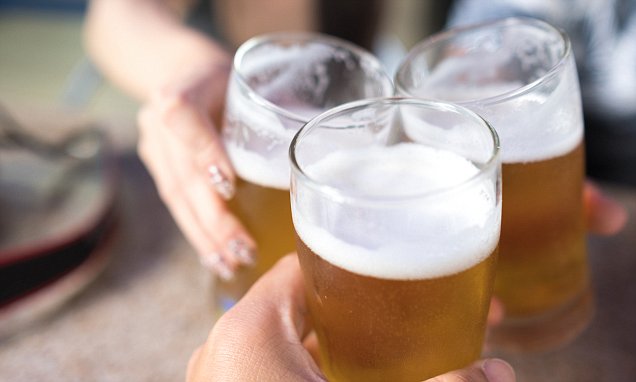 Like all monkeys and apes, humans are social. We have an urgent desire to schmooze and an awareness that alcohol helps our cause, explains Robin Dunbar from the University of Oxford.

Interesting counter point to the latest study that concluded that there is no “safe amount” of alcohol humans can consume. As with all sensationalist headlines, I don’t dispute the accuracy of their findings but hey, the number one cause of death is living. Or, put less sarcastically, lots of things are bad for me so I am going to find the pareto frontier of getting the most enjoyment out of life with the least amount of trade-offs. Moderation in all things, and generally I’m a pretty moderate person.

the number one cause of death is living

Lately I’ve been drinking less and thinking more about how human social customs are to basically do drugs together. It’s weird when you really think about it.

Even at a child’s birthday you all eat sugar together.

I don’t know if I agree with that really. Alcohol is usually only a facet of another activity. Most parties that I’ve been to where maybe the drinking was more than other aspects, there was always food or something like that. Games, etc.

Have you had any other Belgian Double/Triples? Maredsous makes a delicious Trippel.

Man, I remember how Quads became my first major crush in the craft beer world: St Bernardus, Gouden Carolus Cuvée van de Keizer (Blue Label), Gulden Draak, Kasteel Rouge, Rochefort 10. They are so different than any type of beer, but I think they are more dependably good than Barleywines. Sadly they are best during the winter time.

For those of us heading to PAX in mere hours, there are lots of good beer options downtown Seattle. Anybody interested in meeting up for some good beer geekery? Thursday night or Monday night could be good options.

For those who are visiting Seattle and want some beer details: 2 Days, 2 Nights in Seattle's Craft Beer Scene

I just bought some beer and I think I have wasted like $12 which sucks. Good thing I bought other beer.

It’s Stony Creek Hibiscus and Ginger Gose, and I think in retrospect I should have just fucking known that, based on any and all of those words, that I was in for something not my bag. But let me just say that I am not a beer novice and I can get into some fun or quirky flavors from time to time. And the new First We Feast show about beer has got me in an experimental flow today. And let us be clear: the alternative was some kind of rice and cucumber ale, so let’s see what happens right?

Well, I get home and upon first tasting it, the immediate sensation is that flavor of “I have been drinking too much and literally just threw up a bit in my mouth” mixed with a growing aftertaste through that acidic overload that I have actually just been sipping from an old camper’s musty greywater tank. And then it just tapers off from there, with no new flavors or hidden revelations of anything other than “I just had flashbacks to nights I forgot I’d never remembered”

If I was already somewhat into a drinking session and not “hey let me crack one open after a long week” I would be extremely nauseated. As it is I’m just slightly so and have lost my appetite for a while. I’m going to probably dump the rest of this can down the goddamn drain as it is; the other 3 I might save for some poor soul. Like, someone trying to be a hotshot “I like beer” person and see them suffer these cans. Or I’ll shoot them with my paintball gun and see what happens. At least I’ve spent more on worse.

I like all of ginger, hibiscus, and gose… but that’s a gamble.

Usually the first thing I try on a beer list (: Belgians are a great gateway